Tipped as a ‘One to Watch’ way back in the frosty New Year, on a balmy night in August I was indeed the one to watch Childhood, whose debut album Lacuna had BBC 6 Music in unabashed fawning mode. The setting was Oslo, the old railway house nestled in the shadows of Hackney Central Overground bridge; specifically the upstairs bit. I’m quite partial to gigs in the upstairses of pubses: being cramped up in the eaves and stomping on the regulars below. Alas, the over-zealous operator of the smoke machine meant we could have been at Royal Albert Hall for all I could tell. This means I won’t have any comments to offer on any of the drummers over the duration of the evening, whose faces emerged ethereally out of the mist, only to be vanished away again seconds later.

The first drummer who I did not see was Liam Hutton, who was assisting behind-the-scenes rockstar Oli Bayston in his first solo project, Boxed In. Transport for London, those mavericks, meant that I only caught the second half of what appears to have been a very promising set. If it’s a healthy dose of indie electro with some nice intense build-up-release moments you’re after, this is just what the doctor ordered. Here in the mid-teenies set-ups like this are ten-a-penny, but with his crisp vocals and oh so dreamy eyes Bayston elevated Boxed In beyond the norm. Meanwhile, bassist Mark Nicholls appeared to be miming his own act’s name in a turbo-charged game of charades, as he ricocheted around a tiny space which made me think of Rob Brydon’s Man in a Box. On speed. But seriously, listen to their toe-tapping closing track. It’s here:

The crowd vaguely surged forward for the main event, and Childhood kicked things off in a less than groundbreaking fashion with ‘Blue Velvet’, the album opener. Still, it was all very neat and tidy. As with Boxed In, Childhood’s concoction of friendly melodies, cool synth and aluminium guitar fits snuggly into the London 2014 zeitgeist. Unfortunately, any attempt to accordingly get my groove on was thwarted by the barricade of self-important photographers that lined the front of the stage. I might as well have poured my Scrumpy directly into their over-compensating SLRs, given the looks of utter disdain I received if I nudged them off their glory shot. Permissible, perhaps, if frontman Ben Romans Hopcraft had had something more than two facial settings to photograph: nonplussed boredom, and eyes rolling worryingly into back of head. But he didn’t.

Sometimes, a strange tension between him and fellow guitarist Leo Dobsen culminated in a tentative yet deeply meaningful nuzzle; it felt almost improper to be privy to such a scene. Whilst the two founders shared in these introverted moments of mutual appreciation, the keyboardist nodded along quietly, and drummer Jonny Williams remained shrouded in dry ice. It was left to bassist Daniel Salamons to single-handedly keep the show alive, his power stance and cookie monster smile injecting some much needed fun into the Dobsen and Romans Hopcraft nerd-out.

He was at the centre of ‘Right Beneath Me’, a track which revealed a refreshing side to Childhood’s sound after the humdrum first half-hour of verse-middle-eight-chorus-guitar-solo cycles. The pace relaxed, the vocals became deliciously languid, tremolo guitar floated across a voluptuous bassline, and the constrictive pop structure of the rest of the album was unravelled. It was a tantalising glimpse into how the set might have been sculpted into a living, growing organism. Instead, we got this single heartbeat mid-set, and a lifeless bleeeeep elsewhere.

In theory ‘Solemn Skies’, the anthemic closing song, was a shaken up coke bottle of compressed crowd energy. In practice, Childhood didn’t come close to lifting the lid. There is groundwork to be done to get an audience onside, and step 1 would have been not limiting the audience address to ‘Are you hot? It’s really hot in here. Actually, can we turn the lights down? To the man at the back: Can you turn the light off?’ Sorry Childhood, a mid-week crowd in Hackney needs a bit more hand-holding than that.

In the closing seconds, I resurfaced from a brief daydream to discover Dobsen lying awkwardly on the floor with his guitar in a too-little-too-late show of intensity. The more I think about it, the more weird that last bit seems. We were left with the feeling of eavesdropping outside Romans Hopcraft’s garage whilst the band poured their hearts and souls into the music, out of sight. The band to listen to in 2014? Potentially. The ones to watch in 2014? Sadly not. 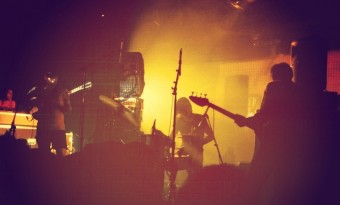 Following the Jabberwocky farce, Thee Oh Sees were one of a number of bands who refused to leave London without playing a show - and a very sweaty one at that...
Read More