In the vogue for shoegaze that has swept Britain over the last couple of years, a metric tonne of bands have had the term hung around their neck despite doing nothing much to warrant it. ‘Oooh, it’s a bit distorted but kind of melodic, it must be shoegaze!” – er, no. Yes, that new Childhood album may be nice ‘n’ dreamy, but I’m going to give the next person to describe it as shoegaze the opportunity to gaze at my shoe from very close range. Repeatedly.

Polish-born Londoners The Enters, on the other hand, are very much the real deal. Formed of brothers Andrzej and Krystian Bulik alongside drummer Rafal Urbanowicz, they satisfy all the shoegaze criteria. Not just the technical aspects – distant vocals melting into washes of sound, driving rhythms propelled by crashing cymbals, a pedal board that’s probably the size of a Turkish rug – but in the reaction they create. Shoegaze should make your mind float away but your body move of its own accord; we’re not talking a psychedelic mambo you understand, more of a soporific sway, but it should be noisy enough to cause a physical as well as emotional reaction.

The band’s debut EP, Small Town Love (available on 12″ and DL here), does exactly that. The title track swoops in like it’s riding the crest of a zephyr (not without the odd bout of turbulence), before the gorgeous melody of ‘End of the Summer’ starts soothing you into Shields-ian slumber while the drums threaten to shake you out of it. It’s a beaut. Six-minuter ‘Sweet Girl’ then circles around like a stoned bird of prey before eventually crashing into waves of effects-drenched guitars. The EP was recorded on Lightship 95 under the stewardship of Capt. Rory Attwell, and you can only imagine the tide was in during recording judging by how it pitches one way then the other.

Closer ‘Robak’ then sees things out in intriguing style, abandoning rhythm and harmony and penetrating deep into a jungle of distortion and delay – a delicious dessert of white noise after a sumptuous shoegaze feast. So the next time someone brings you a ‘shoegaze record’ by a jumped-up indie band who happen to have inherited their elder brother’s effects pedals, chuck it away and encourage them to infiltrate the world of The Enters instead. They won’t be sorry they did.

You can catch The Enters at their EP launch, which takes place at The Shacklewell Arms on Sept 13th. 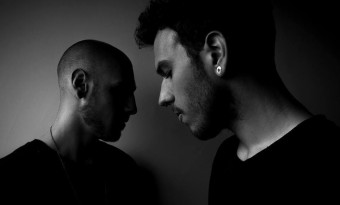