My call up to throw a review together for this East End Film Festival event came at short notice, giving me little time to look into the background of Eiichi Yamamoto and his 1973 contribution to the Animerama trilogy, Kanashimi no Belladonna.

In contrast, the familiarity that Charlie Boyer & the Voyeurs felt with Yamamoto’s work was self-evident. The challenge with scoring Belladonna was to draw subtlety from a graphic salvo of rape, murder and bestiality, and define the imagination of the audience, channelling it through the score and attributing meaning to the snatches of Japanese (for those of us without it) that are scattered through the film. The danger of a woman as a sexual object, both to herself and to others, seemed to me to be an overriding theme here. I wanted to believe that this was comment against the objectifying of women and utility of sex, and fortunately was granted Voyeuristic freedom to do so.

A little television relayed the visual to the band, acting as cue for each movement, and as my eye caught snatches of their activity behind the screen I could see that these were five men working as technicians rather than performers. It was nice to see such synergy and utter removal of pretence and image; the use of analogue synths demanded attention and added to the aesthetic created by the film, pleasantly shallow in artifice; an other-worldly reality. Five men perfectly regulated by 93 minutes of 41 year-old animation. Unexpectedly compelling. 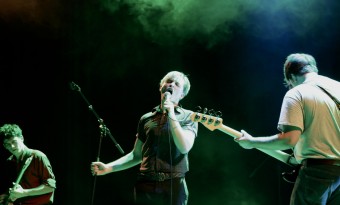