Today the gates open to one of the world’s biggest playgrounds, Glastonbury Festival of Contemporary Arts. Like most playgrounds in Britain, for the following few days it will be largely be populated by drunks, drug dealers and old geezers with big beards and raincoats. Fortunately, both beards and raincoats will be sported purely for practical reasons; i.e. they’ll belong to a crystal healer from Totnes playing folk guitar in a thunderstorm.

However, in contrast to other playgrounds (apart from a couple near Richmond Park) this one will also be populated by international rock stars, making a pilgrimage to this legendary site near the standing stones, seeking the rejuvenating elixir to their careers that only sacrosanct Somerset mud and a million BBC television cameras can provide. Ironically, despite this year’s headliners being long-rumoured to again consist of resurrected legends along the lines of Kate Bush, Prince and Fleetwood Mac, we’ve instead ended up with the significantly newer but significantly crapper sound of Leicester lad-rockers Kasabian. Oh well, at least there’s no Rolf Harris this year.

Still, there’s no need for rubbish headliners, looming rain-clouds and the inevitable appearance of Kate Moss in £2000 wellies to leave you despondent. As always at Glastonbury, the real fun tends to occur well away from the all-seeing TV eye of the Pyramid Stage. However, considering the site covers a fairly daunting 900 acres, it can be pretty overwhelming working out where to begin. To assist festival-goers, we’ve made a little itinerary of non-Pyramid/Other Stage acts that we highly recommended catching, along with their most appropriate festival tracks. From Little Simz to Totally Enormous Extinct Dinosaurs, they should all help your Glastonbury go off like a wayward Chinese lantern setting fire to some nearby woodland.

Of course, the nature of Glastonbury means that you’ll inevitably end up spending your entire festival watching Professor Moo playing a 24-hour gabba set in the one place you could find which wasn’t flooded. Or in other words, watching a cow being milked next to a generator under the awnings of a vegan hog roast stand. Nonetheless, if you are able to make out the digits on your watch, set the time for this lot…

The acclaimed rapper/poet recently released her incredible Everybody Down album on Big Dada, and, considering she’s also performed one-woman plays in the past, shouldn’t be lacking the showmanship to kick your festival off with a bang. Her track ‘Stink’ should go down well, because if you don’t already at this early stage of the festival, you shortly will. Also, the lyrics largely focus on relationship trouble and massages, both of which are in strong supply at Glastonbury.

He’s a long way from the part of London’s docklands which gave him his stage name, but we’re sure the sight of dinghies being punted along newly-sprung rivers through the camping grounds will help William ‘East India Youth’ Doyle feel right at home. After the success of his debut album Total Strife Forever (review here), his live show has been getting stronger and stronger reviews over the last year, and should peak with the airing of ‘Looking For Someone’. Which is something you’ll probably spend most of your weekend doing after you get separated from your friends and drop your phone down the lavs.

Hopefully you won’t need to just ‘Look Like You Love It’ while you’re watching Elliphant perform her Scandinavian take on dancehall, as evidenced on the title track from her latest EP. If you are faking it however, a quick tip: onesies, animal hats and garish facepaint may lead some people to assume you’re crying on the inside, even if you aren’t.

Having already converted pretty much anyone who’s seen them play live (like us), Brixton barnstormers Fat White Family are playing a ton of festival dates this year as they attempt to take over the countryside with their Crampsian grooves. In fact they seem to be playing about a dozen slots just at Glastonbury, so you’ll find it hard to miss them. Plus, as well as their excellent music, they’re probably a more reliable source of drugs than most of the actual dealers onsite. We’ve selected ‘Wet Hot Beef’ as our tune, partly because it actually sounds more appetising than most of the festival food you’ll see advertised – and I’m a vegetarian.

There are many ‘Things You Can Do’ at Glastonbury, but one of the most memorable may well turn out to be watching Kid Koala, Dan the Automator and Del tha Funky Homosapien bring their dystopian take on hip-hop to the West Holts Stage. Apparently they’re bringing a full orchestra with them to, which kind of turns their slot from a thing you can do into a thing you must do.

Temples are the perfect band to see at Glastonbury. Partly because their jaunty psychedelia and flamboyant dress sense will take you right back to the heady days of 1971, and partly because of they have a tune called ‘Shelter Song’, and judging by the current weather forecast, shelter is something you’ll desperately be seeking at this point. Not that you can actually shelter inside a song of course, but at least you’ll be in the nice, dry John Peel Tent.

By Monday morning, knackered, soaked and exhausted, you’ll probably be hoping for a tent with some sort of ‘Instant Disassembly’ function (bit laboured this one). Unfortunately Parquet Courts probably won’t be there to help untie your guy ropes and find your tent pegs, but while they’re playing this track from their brilliant new album Sunbathing Animal (review here) you’ll have probably decided you never want to leave the site anyway.

Not only is Merrill Garbus’ eccentric and irrepressible music perfect for Glastonbury but the chorus to ‘Sink-O’ warns that “the Earth will swallow you up”, which is worth remembering at all times while on Worthy Farm. Largely because it’s likely to happen at any time.

Not only will Danny Brown be in his hedonistic element at Glastonbury (have a look at this brilliant Krent Able comic about him to work out why), but chances are half the crowd will be in a ‘Kush Coma’ themselves by this point. They couldn’t hope for a better soundtrack…

“I heard you made the hull of a boat downtown,” begins Metronomy’s recent single ‘Reservoir’, and frankly that could well be quite a useful skill to have by this time on Friday night. The band’s recent gig at Brixton Academy was a great spectacle, and it’ll be interesting to see whether the stagecraft and costume changes make the trip to Worthy Farm. Even if they don’t, the music alone will be worth the trip…

If you find yourself screaming ‘I’ve Arrived’ on Saturday afternoon, it’s either because you’ve just come up on what you thought were dud pills, or you’re really, really late to the party. Still, as long as you get there in time for Edinburgh alt-rappers Young Fathers then it’s not a total loss. This trio have built a reputation for amazing performances, and are one of the acts we’re most excited about catching for the first time.

Glastonbury attendees may well be worried about approaching storms, but this number by Camden’s finest Wolf Alice is one ‘Storm’ everyone should want to get caught in. Indeed, the band have been whipping up something of a storm themselves (these puns are really getting tiresome now) – when we interviewed them last year they said their aim was to “get big until it blows up in our stupid faces”. Seeing them live is the best way to find out why they’re set to do just that (well, hopefully only the first bit).

By now you’ll probably be in the mood for a little ‘Dance’, and sororal post-punks ESG will be only too happy to oblige. We caught them at KOKO a while ago (review here) and their set will only be enhanced by the consistent party atmosphere in Pilton.

I’ve yet to meet anyone who hasn’t been converted to Anna Clavi after seeing her play live. Between her fantastic guitar playing and incredible voice, songs from recent album One Breath (review here should sound incredible as the sun starts setting. Put simply, I can’t wait for her to ‘Sing To Me’ (ugh, that’s the worst one yet).

In fact I’m going to abandon the puns for now, largely because finding a decent one for Jon Hopkins’ ‘Open Eye Signal’ is beyond me. His Immunity album (review here) was one of last years’ finest, and his crisp, deep and powerful electronics should give Glade’s formidable sound system a thorough workout.

Kagoules are pretty much essential at Glastonbury, and noisy Nottingham three-piece Kagoule should prove to be the most essential of all. If you wake up feeling groggy and depressed on Sunday, then they may just ‘Adjust The Way’ you feel…

Suitably reinvigorated, you should then be in the perfect mood for some sweaty, fast-paced, Nubian-inspired jazz courtesy of the magnificent Melt Yourself Down. Their eponymous debut album (review here) sounds even better live than it does on your stereo, and as you may notice by the sudden smell of hi-grade wafting around during their set, they have the power to turn Glastonbury into a ‘Kingdom of Kush’…

After all that, you’ll probably be in the mood to ‘Devour’ even the most unappealing produce on offer from the food stalls. However, in terms of satisfying your musical appetite we can think of nothing better than North London’s Little Simz. Having released a bunch of amazing mixtapes recently, we’ll be interested to see if any of the rapper’s SPACE AGE cohorts make an appearance too…

According to Google translate, ‘Lo Decidi Yo’ means “I Decided I”. Well, we reckon YOU should decide to see the sound-bending wonder that is Argentina’s Juana Molina. When we interviewed her earlier this year, she bemoaned other artists being able to turn up at festivals with little more than a laptop while she has to lug a load of heavy gear around. This set will show exactly why that extra legwork pays off.

It’s likely everyone will be feeling pretty ‘Faded’ by this point, which is why a dose of Lizzo’s energetic hip-hop will be just what the doctor ordered. When we profiled her back in March, we noted how her musical background includes everything from electro-pop and prog rock to classical flute and girl bands. Lord knows how much these disparate influences will be evident onstage, but we can’t wait to find out…

And so to bed. Ha, as if. There’s still time for one last dance, and when it comes to the perfect ‘Closer’ of the festival, you won’t find a better one than the excellent TEED. Now to the Stone Circle to watch the sun come up and a thousand hippies fall over in the mud. Bliss…

Soundtracked: The Wolf of Wall Street 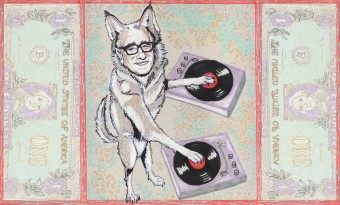 Martin Scorsese gets compared to the poor bloke beatmatching between Paris Hilton's legs in the second of our series analysing film soundtracks...
Read More