Favorite Waitress is an album that needs to be listened to a couple of times. Often this is a polite way of saying it’s a bit shit, but not in this case. It’s just, perhaps, not the easiest to get into. Does that mean that it’s a continuation from The Felice Brothers’ last LP, Celebration, Florida, which divided opinion because they threw in a lot more electronic elements? No. Have they abandoned that approach completely? No. So is it the ‘return to form’ that those who didn’t like Celebration, Florida might want? No, although you’d be forgiven for thinking that at first.

The opening track of the album, ‘Bird on Broken Wing’, seems at first like a rather anodyne start; it’s a good song but holds no surprises. There are points when the deliberate Americana can grate a little, especially with tracks like ‘Constituents’, where the heavy-handed cultural references and overly simple rhyming seem to let a well-crafted tune down. In fact, lyrically, the album can a bit of a disappointment.

Having said that, there’s a lot to like about Favorite Waitress. ‘Lion’ and ‘Cherry Licorice’ both have the kind of loud, shambolic exuberance that you know is going to translate brilliantly into a live show. ‘Cherry Licorice’ also showcases perfectly the silliness and joy in simple rhyming that pervades a lot of the album’s lyrics. Favorite Waitress also exudes the beautiful melancholy that the band is so good at. This is why I say it needs to be listened to a couple of times through before passing judgement: what makes The Felice Brothers a great band to see live is their ability to mix stomping, ramshackle tunes with that lilting, off-kilter melancholy in the same show, and this album captures both of these elements really well.

It may not be their best album but, like their live shows, it takes a collection of seemingly disparate parts and sows them together so neatly you’d be forgiven for thinking it had been done blind drunk, which is pretty much all I would ask of a new offering from The Felice Brothers. 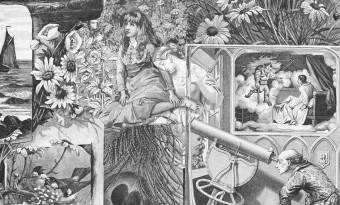