The O₂ is a shithole. There are no two ways about it. It’s a soulless, sad dome, surrounded by Stepford chain restaurants that play chart hits at deafening volumes to disguise your sighs of sadness as you fork out £7.50 on a gin and tonic (single). When Pitcher & Piano becomes the least of all evils, it’s fair to say you’re not in Kansas any more, Toto.

Regular punters should stay clear, IMHO. However, if you happen to receive a free concert ticket to a US popstrel’s London show, tucked into a comfortable corporate box that’s so close to the stage you can almost feel the heat of the pyrotechnics, yet far enough away from pimpled adolescent fans to avoid being doused in pus and pheromones, it’s not quite so bad.

I was the latter and, full disclosure, this review of Katy Perry’s first O2 show is irretrievably tainted by the fact that I was being liberally watered with sauvignon and stuffed with wild boar sausages on a press junket.

The evening’s delights began with Icona Pop. The Stockholm duo were launched into the worldwide public consciousness when ‘I Love It’ was blasted over the televisual waves during the infamous ‘cocaine scene’ in Lena Dunham’s Girls. These nutters took to the stage wearing deconstructed Storm Trooper suits, tooting kazoos for their pseudo-lesbian performance of ‘Then We Kiss’. It was, quite frankly, genius.

But when Katy Perry arrived on stage, decked out in her silver two-piece dress, hemmed with neon piping, streaking down the giant, penis-shaped stage thrusting into its underage audience, she completely eclipsed her support stars. 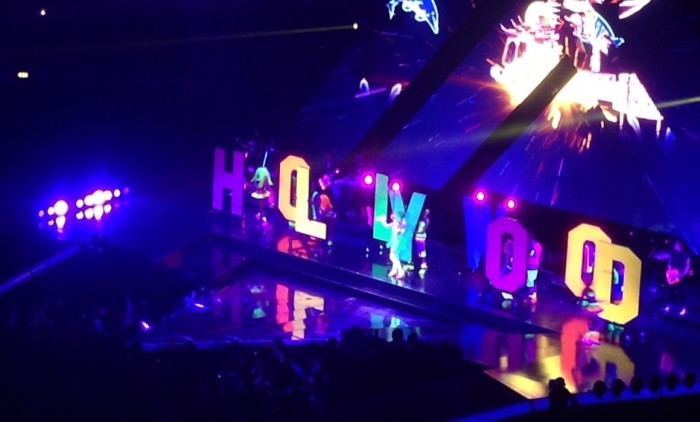 Her set opened with ‘Roar’ and the crowd obliged.

Her ensemble was inspired in such a cavernous venue. You’d be hard pushed to miss her, even in the cheap seats.

I leaned in from my vantage point to detect any signs of miming or autotune. She sang throughout, but alongside a banging vocal track so overpowering that to sing out of tune would be tantamount to colouring outside dot-to-dot lines an inch thick. The opening anthem was followed by weaker tracks, ‘Part Of Me’, and ‘Wide Awake’. Neither of which I knew, but I guessed the titles from the repetitive chorus lyrics.

Perry’s performances were more notable for her lavish use of costume. She adopted a quasi-Roman theme to start. Flanked by centurions that alternatively protected their queen and menaced her, she tripped around like an erstwhile Dido, diddling their mohicans as she went.

Perry hopped from classical to Masonic within a track or two, by way of ancient Egypt. Everything became throbbing triangles of light and mincing mummies. Next, the show borrowed liberally from Cirque Du Soleil, complete with surrealism and acrobats. For her rendition of ‘Birthday’, she was even dragged around the arena on a giant bunch of balloons, circled by a giant birthday cake with human candles. There were a few Alice in Wonderland moments too. In fact, there were so many ‘nods’ to various literary figures that Perry nearly gave herself whiplash. 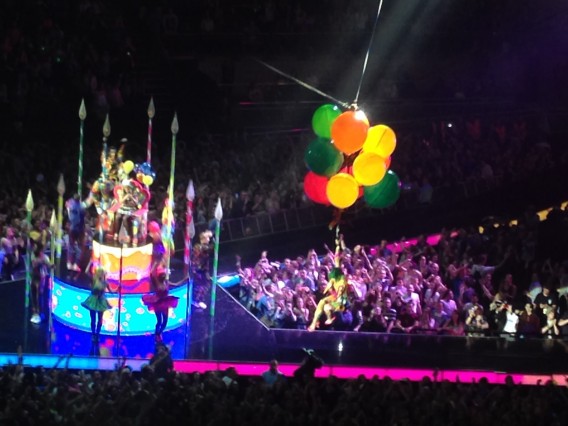 It was all good fun, though, until she tried to go all suffragette on The O₂. During her rendition of ‘The One That Got Away’, she asked the audience, “Do you love yourself? You have to love yourself.” And then attempted to preach feminist maxims to her tween crowd. The costume change for ‘Kissed A Girl’ involved all grotesque fat suits, with engorged tits and asses. Could this be a metaphor for the over-sexualisation of women? Her attempt to be meta was undone by a later performance of ‘California Girls’ where she wore a painted body stocking. All T&A. Her whinging about the pressures of fame didn’t help either. “I want to tell you something important about being a pop star,” she trilled. “You can’t eat pepperoni pizza even though you dream about it night after night.” Move over, Emmeline Pankhurst.

Fans seemed impressed, however, and she gyrated and bopped for more than two hours, which is pretty good value at The O₂. The bass track thumped ceaselessly, keeping the energy high, and when she sang ‘Firework’ for the finale, she hit the high notes flawlessly. Quite the departure from her miserable X Factor live performance. All in all, it was a decent set but her socio-political posturing was off-key. 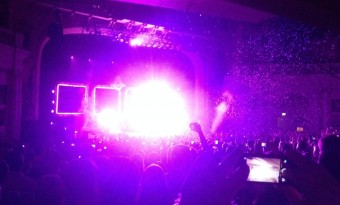 Lorde has gone from playing Madame Jojo's to selling out Brixton Academy in under a year. Nick Burman explains why Michael Gove should be adding her to the music syllabus...
Read More