There are so many guitar bands in Hackney these days that it’s becoming difficult to get excited about any of them. It’s not the bands’ fault (well, in certain instances it is), but the words ‘new guitar band from Hackney’ are starting to have the same soporific effect on my brain as phrases like ‘Kim Kardashian wedding photos’ or ‘coming up next, highlights of Stoke City versus West Bromwich Albion’. The increasing amount of bands competing with each other for attention is only making it more difficult for me (and I presume others) to give a fuck; it’s perhaps no surprise that two of the capital’s more successful current guitar bands, Wolf Alice and Fat White Family, hail from outside Hackney’s indie ghetto, in North and South London respectively.

Still, the endless slew of similar-sounding bands does mean that when the cream eventually rises to the top, it does at least taste delectable. We’ve raved about the likes of Shopping, Lola Colt and Tense Men over the last six months, and now a new band has joined them at the top of the East Loondon tree – Homerton’s H. Grimace. The three-piece, consisting of Hannah Gledhill, Asher Preston and Jean Kern, caught our ears a while ago when we first heard their debut EP, and its release this week appears to have got a few other people excited too, judging by its prime-time appearance on Tom Ravenscroft’s 6Music radio show last Friday.

A quick spin of the band’s eponymous release and you’ll probably realise why. Opening track ‘Lands of Gold and Green’, which comes complete with a rather lovely Super 8 video (see below), grabs the attention immediately, with the verses switching from brooding 4/4 to floaty 3/4 interludes, before shooting into a straight-up rock chorus. Most bands would probably have split the ideas here into two or three different songs, but the tonal variety and slightly rough-around-the-edges production provide plenty of aural refreshment.

The rest of the EP is, if anything, even better. ‘No Wedding’ kicks off with a jerky Josef K-style riff before the tempo drops into more languid territory, easing its way into a gorgeous chorus that recalls the brilliant Autolux at their best (whatever happened to them by the way?). The male and female vocal rounds in the chorus work well alongside some upbeat drums, making the song briefly sound like an old surf-rock 7″ played at 33RPM, while a growling instrumental section only adds to the fun.

‘Cemza’, initially featured on a split EP with Joey Fourr, follows hot on its heels and adds a frisson of angst into proceedings, before finishing with a rousing, bass-led instrumental section. ‘Median/Mode’ completes the EP, and is anything but average (seewhatIdidthere?), although its slower pace does initially take excitement levels down a notch. The vocals take things back up a notch though, coming in just as the guitars are given an extra layer of distortion. The effect is akin to falling asleep in the back seat during a routine drive through Warwickshire, only to wake up in the middle of the Mojave desert. For some reason the vocal melodies make me think of Mansun’s Attack of the Grey Lantern. This is a good thing.

Ultimately, it’s still going to be difficult for H. Grimace to raise themselves out of the six-string swamp of their E-prefixed stomping ground, but they deserve to be heard well beyond their immediate locality. As someone who’s moving out of Hackney this week and not looking forward to traipsing back umpteen times a week to see yet another much-hyped band disappoint me, this is a group that is undoubtedly worth travelling for. I can’t wait to hear more.

Roman Remains to be exhibited by Gary Numan and James Lavelle... 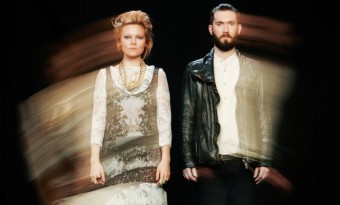 A brooding electronic act featuring two members of The Duke Spirit are about to head out on tour with the iconic Gary Numan. We say he's got good taste...
Read More