Teleman are catching the ears of just about anybody who tunes into the BBC’s numerous radio stations right about now, thanks to hype that’s been building ever since 2013’s odd little single ‘Cristina’ was put on seriously heavy rotation. Without even a released album at this point, it’s pretty impressive that, on the weight of a couple of singles, The Fleece in Bristol fills almost to capacity for the ex-Pete and The Pirates boys’ quirky new band. In fact, quirky would be the order of the day for the entire line-up, with Gentlemen as main support and Bristol band Why We Love opening the evening.

Why We Love seem like a new band finding their feet, in the way they carry themselves as well as in their songwriting. That’s not to deride them at all, however, as their potential for greatness is abundant. They have all the elements of something great, the beginnings of a sound that might occur if you put together a supergroup made up of members of The Smiths, Cold War Kids and Interpol. Their current single ‘Patina’ shows all of this potential, with its memorable jangly guitar intro being a decent hook by anyone’s standards. There’s something quite inoffensive and innocent about this group, and while that can often be detrimental to young bands in the current musical climate, Why We Love seem to make it work in their favour.

Gentlemen walk onstage dressed to the nines, each member with more glorious hair than the last. The London band are sonically a little difficult to pin down. They have the style and sonic hallmarks of bygone eras in the same way that Temples do, but they’re not quite all the way down the 60’s psych road, as is the norm for many of their peers. They tread a path less travelled in this day and age, that of early progressive rock a la Yes and King Crimson. Odd time signatures, indulgent guitar solos, big vocal harmonies and abundant synth tones that sound like something the BBC Radiophonic Workshop would have turned out during the late ‘60s. All of which makes up Gentlemen’s larger than life, bombastic sound. The band lack nothing in the songwriting or performance department, recent single ‘Gentle Duke’ being a prime example of their chorus-writing prowess, with the band powering through it shaking their not inconsiderable manes in a rather graceful manner.

Teleman arrive on stage to a loud reception from the packed-out venue: big, genuine cheers and applause. All this adulation seems slightly out of the ordinary for a band with one big hit who’ve yet to release an album, however once they start playing it becomes very clear that there is a lot of substance to their music. Quirky without being twee, they have a charming sort of innocence about them, the kind that makes you really root for them. There is something slightly Hot Chip-esque about Teleman, in the very straight-ahead, krautrock rhythmic feel to their music, and in the way they carry themselves, like an excitable young version of Kraftwerk.

The crowd need very little motivation to dance, cheer and sing along, as Teleman have them in the collective palm of their hand. This rush of enthusiasm hits critical point when they play ‘Cristina’, and to be fair it is a very solid pop song, but the band have far more impressive, beautiful and accomplished songs in their small arsenal, such as newer single ‘23 Floors Up’, which hopefully for Teleman will bring some serious longevity to their popularity. After exhausting what must be almost all of their material during their set and encore, Teleman leave the stage with much of their audience still begging for more, and the remainder heading for the merch table – I will say again, this is the kind of band that gets you to root for them, support them, buy their merch and show your appreciation. It really feels as though they’ve worked hard for it, and the fruits of their labour will be available for the world to hear soon: their debut album ‘Breakfast’ is out on 2nd June…

The Great Escape, Brighton - Friday May 9 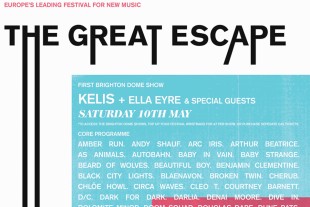 The-Monitors were at Brighton's The Great Escape for the Friday portion of the festivities. This is what we thought...
Read More