Last week Vice’s dedicated music channel Thump dropped the latest in the ‘XOYO Loves’ series. The short film documents the London club’s first ever residency which saw Eats Everything take the reigns (watch the full video below if you haven’t already).

Though the residency garnered a mixed reception on launch (old clubbers adding to their nostalgic bag of rants against the newer generation of ravers), Eats proved the resident’s relevance, holding his own with twelve consecutive sold out shows.

Featuring Totally Enormous Extinct Dinosaurs, Justin Martin and Disclosure as well as Eats – the Thump documentary looks in detail at the residency of the DJ and producer, real name Dan Pearce, and what it means to be a resident today.

Avoiding strobed shots of gurning, twisted faces, it’s rare for a club promo video to have us screaming for more. An impressive task, we caught up with young film director Spike Morris who summed up turning three months’ worth of partying into a six minute short film.

Hey Spike, can you tell us a little bit about the ‘XOYO Loves Eats Everything’ project?

XOYO launched their DJ residency series back in January this year and kicked it off with Eats Everything playing host to the club every Saturday for twelve weeks. We were getting video ideas together and I pitched what I called a mini-documentary, taking it away from the club a little and investigating what’s different about a residency through interviews with some of the guests that Eats brought along.

It looked like a lot of fun to film, were there any particular highlights for you?

I really enjoy the music from the era being discussed on camera, and it’s incredible to meet with artists like Dan in their studios and pick their brains about that in person – I’m so grateful to all of them for making the time to meet me. I ended up filming at something like six of the residency nights over the three months too, that was fun for obvious reasons. I got super drunk and smashed a filter one night though.

You’ve worked on a few projects with XOYO now, how’s that partnership going?

It’s been a year since I first started working with the team there, and I feel like this latest project reflects the confidence we have in each other. There are loads of formulaic club videos out there and I’ve always been keen to try and create content that’s genuinely interesting to fans of the music, not just montages of crowds jumping up and down. Easier said than done though – it takes certainty in your director to let him run around the country interviewing people about different clubs(!). Most people would rather save the time and go for the safe bet, so big up XOYO.

People have picked up on the importance of video content in the digital age, how do you make sure your work stands out?

Making great work is a big subject and I’m not an expert. If you can’t get the clients you want, go out and develop your style on personal projects (people will notice these the most). Keep at it even on days you don’t want to. Know that you’re going to be rubbish for a while. Fail. Make better mistakes tomorrow.

That’s the hard part, but it’s simple after that: share your creations. Give away your secrets, blog about the process, show your inspiration, reveal failed attempts, invite questions, even meet up with peers who take an interest in your work. In the age of the Internet, focus on building a network around you with real, lasting connections. That will get you all noticed.

If that sounds like giving away your magic formula, you’d be surprised. “Don’t worry about people stealing your ideas. If your ideas are any good, you’ll have to ram them down people’s throats”, said Howard Aiken.

You have a distinct style – how has this developed?

I’m just copying what I love. Nobody starts with a style or voice, it’s up to you to seek out and immerse yourself in the pieces you love and stealing from all of it simultaneously – hey, that’s your style.

Could you describe your style in three words (turning the tables on this one haha)?

Haha so hard! I really don’t know, maybe for ‘geeky’ as I also work as a director of photography and often imagine scenes captured using specific lenses/settings etc, but I’m sure others would say something completely different. The funny thing about putting your work out there is that people take whatever they want from it.

You’ve worked across many different projects from Channel 4’s Random Acts to documentaries on the Middle East – how do you approach each one? Is the creative process still the same across the different genres of film you’re making?

Maybe it’s useful to approach them in a similar way. When you pitch a music video with a treatment, you’re essentially putting down in writing what is expected from the video. Even though you don’t know what you’re going to get when shooting a documentary, it’s still critical to outline the structure of it in a similar way, even if it’s just for yourself.

Any more music-related projects on the horizon?

New music video for Roy Davis Jr. is in the edit and hopefully lots more live broadcast projects. I’ve been enjoying experimenting with that.

Where The Week Ends Playlist 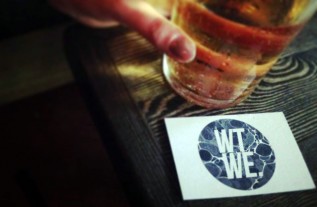 While the tradition of Sunday partying calmed down with the death of yacht rock, Where The Week Ends are doing their best to relight that flame...
Read More