Its expansive nature and inherent sense of narrative make ‘Moon Gangs’ strongly resemble movie soundtracks – in particular sci-fi flicks, with its shuddering, wobbling waves and certain long sections of solitary hums like spacecraft passing you in a cosmic field. The concept of the EP is sophisticated – it’s like an exploration of deep space purely through sound – but while the bassy rumbles are astounding, the lighter sections are somewhat anticlimactic.

Opener ‘I’ takes on a slow burn, building but never reaching the point of tangling interest expected. As a contrasting example, Ben Frost’s ‘Theory of Machines’ is a cascading epic just under ten minutes long. This deep, textured rumble crashes waves of repetition onto one another to create powerful and profound white noise, the background roar of the universe. ‘Theory of Machines’ is in the same school of music as Moon Gangs, focusing on the dreamy and transcendent. But rather than building noise on noise, ‘Moon Gangs’ moves from scene to scene on distant planets, honing the aural narrative with a level of dedication that it takes a few listens to appreciate.

The music is deeply introspective, but as with many introverts, the more you look, the more you begin to see. ‘Moon Gangs’ is split into three long tracks, and on first impressions it seems that these are really just three long tracks. On listening to ‘I’, ‘II’ and ‘III’ consecutively, the breaks appear merely aesthetic: the EP could just as well have been presented as one thirty-five minute long track. Maybe this was a sociable decision, making an otherwise obtuse EP from a fairly new artist more accessible. But after attentive listens it’s clear that the sounds are too complex and form too much of a narrative for the track splits to have essentially been an afterthought: instead, I see the tracks as acts in a play.

Portions of tracks begin to take on more significance, and encourage the sense of something nearby – an enormous hovering metal vehicle; a sparkling, flickering light – in the listener too. You can’t help but be a little transported when you sit back and open up to the suspense, danger or intensely visual sounds brought to your brain to chew on. And if you can’t quite get into it, the official video for ‘I’ pairs some really attractive ready-made eye toys with the music.

‘II’ develops the journey, it’s the eye of the storm if you will, and features more of that vast rumbling bass. It begins like you’re experiencing a beautiful natural phenomenon, the whales of deep space are passing by, huge, dangerous, beautiful and peaceful. Beats chip in and fade into hums, which then pick up into upbeat synth. The curious thing about this EP is, while every bit is unique and tells a story, it is also all in such a similar vein that it’s easy to lose yourself and have no idea which track you’re on.

Exploring the starry dark side of the electronic, the tracks can feel lengthy and at points shudder under the weight of their potential, but open up to reveal an impressively broad scope that is ultimately fascinating. The complexity and deep thought behind this EP is clear, leaving the impression that Moon Gangs trade in the sound of other worlds. 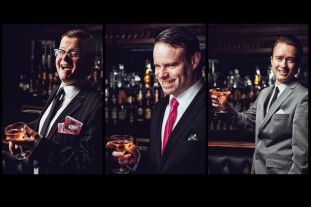 Thanks to Dundee three-piece Fat Goth, it’s as if the dull rock landscape of the 2000s never happened...
Read More