In a world where everything seems to be as middle of the road as possible (as I write this the smooth synth tones of Future Islands’ ’70s love-in is apparently becoming ‘the biggest thing ever’), it’s the acts with a little more bite that really grab your attention. On one side of our current obsessions is the melee of styles being brought under an electro-R&B glow by the likes of Kelela and Young Fathers, dipping into the romantic, modern innards of the individual, and on the other side is the grizzly, grainy guitars from the likes of Fat White Family and Drenge, tapping into our grey surroundings.

It’s in this second category that Snack Family sit, as evidenced on their upcoming EP, Belly (released on May 19th). Opener ‘Long Pig’ half-stutters into view, full of bile and mouldy teeth, while the sax-soaked strut of title track ‘Belly’ is so sleazy it’ll probably be hauled in for questioning by Operation Yewtree. Andrew Plummer’s throaty vocals combine ’60s rockabilly sensibilities with the weirdness of Nick Cave, Captain Beefheart and Eighties Matchbox, while Tom Greenhalgh’s staccato drums crack around James Allsopp’s bluesy baritone saxophone. The whole EP digs up the desert vibes of Southern Gothic, while also having just enough British eccentricity to keep it from being unbearably retro – assisted no doubt by Nostalgia 77’s Ben Lamdin being on production details. Imagine a sticky, swamp rock incarnation of Melt Yourself Down and you won’t be too far away.

We’re delighted to host the first listen of ‘Belly’ (above) on The-Monitors today, so you can fill your ears with their filthy eruptions before heading to their bandcamp page to pre-order hand-numbered, limited edition CDs (with brilliant original artwork by Drew Millward). And for an even more visceral experience, be sure to catch them on their upcoming launch tour, taking place on the following dates:

Imaginary Forces introduces us to his Corner Crew... 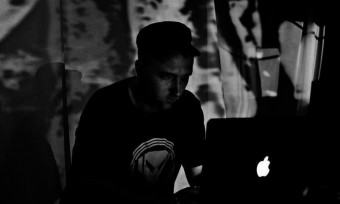 “As if The Fall and King Tubby got together to record cover versions of Pan Sonic” - Imaginary Forces talks us through his Corner Crew EP...
Read More