Now I’ll be honest. I haven’t been to a gig in ages. I now work in the woods, out of London, so my usual routine of a gig-a-week has seriously been affected but when the opportunity arose to cover a show by Lætitia Sadier (you may remember her from such psychedelic indie acts such as Stereolab and Monade) I snatched it with both my grubby mitts and took my camera along too. I’m happy I did because to see her play the dive that is The Water Rats felt as if we were intruding on a practice session in a rehearsal space more than a concert. Or construction site, if you take into account the rather large hole in the ceiling covered by tarpaulin (it collapsed last October before a soundcheck).

She’s joined by a bassist and drummer and fleshes out songs from her albums The Trip and most recent effort Silencio but the evening’s 50 minute set is primarily a showcase of new songs. On ‘The Rule of The Game’ she ponders “Is there life before death?” on a song which also touches on how financial markets rule our lives. New single ‘Then, I Will Love You Again’, picks apart the issues of long distance relationships and takes inspiration for its title from Barbara Loden’s film Wanda. It oozes driven energy, propelled by super-fast handclaps provided by her supporting members. 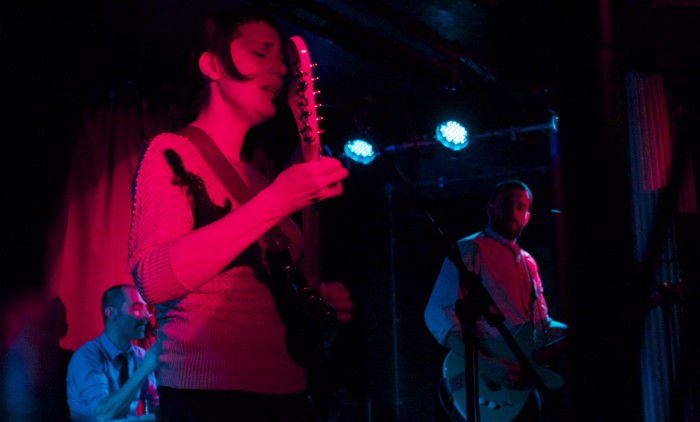 The new batch of songs seem to follow the same vein of Silencio in that they contain more of the same vivid political themes for which she is known. How little has changed in the 20 years since her scathing criticism of power in the likes of Stereolab’s ‘Ping Pong’, ‘Outer Accelerator’ and ‘Nihilist Assault Group’, and she is at her brilliant best on ‘For The Nation’ which deals with topics such as democracy but over a lovely ‘Ping Pong’-esque riff and oozing a breezy and effortless cool. She discusses the security of our freedom – “You have to take freedom” – and plays a song which is underpinned with dreamy synth pop 10CC would be proud of. On new song ‘The Milk of Human Tenderness’ she plays a song so sweet you’d be forgiven for missing its disdain towards world leaders and criminal dictators. The mix of lush harmonies delivering highly politically-eco-socially charged lyrics is a deceptive tactic but one which I can’t help admire. 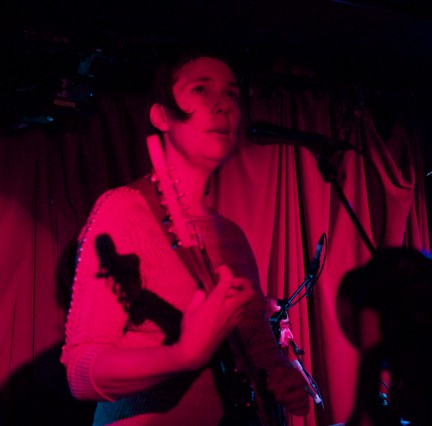 “Don’t forget the 22 May election” – “Vote Labour” a voice cries out from the crowd. “No, I’m not voting the FAKE left Labour. or UKIP. Blaeeeghh!”

Hear hear! But thankfully it’s not entirely an evening of ‘Newsnight – The Musical’. She ends with some very personal and emotional songs. ‘Silent Spot’, a song about deciding when you depart, the ethereal beauty and positivy of ‘A Million Years Trip’, and ‘In My Sleep’, a song Sadier takes on solo about a submarine dream she had, watching shows and spectacles with a friend. It really is heart-warming how she evokes the beauty and ingenuity of human creativity with only her voice and her Fender. How she isn’t performing this handful of songs to a sold out crowd at, say, the Barbican is a travesty. Thankfully her next round of dates will be supporting Neutral Milk Hotel so fingers crossed this bunch of songs can be appreciated by a larger crowd next time around. 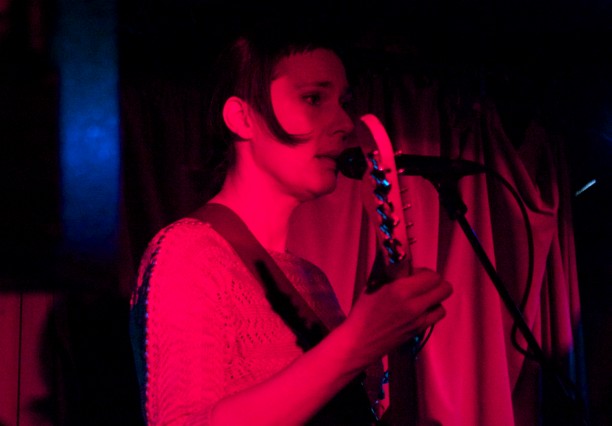 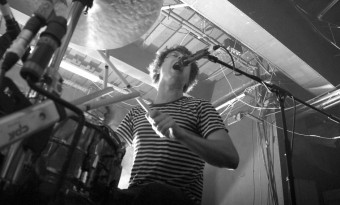 Verily, it is the age of the two-piece band, as the unholy trinity of Blood Red Shoes, Slaves and DZ Deathrays proved at, erm, Trinity in Bristol...
Read More