Our guest editor this week is Patrick Swift, a writer hailing from Huddersfield who currently resides in London, where he likes to think he is on the cutting edge of music and fashion. His passion for all things music have led him to write for well-known outlets such as Mixmag, Trap Magazine, Wordplay Magazine, The405, Drunken Werewolf, Don’t Panic, Lily Mercer, IAmMusicTV and The Tipping Point amongst others. In his first Monitors piece he catches up with Yorkshire’s Behemoth of Bass, Mr. Jamie Grind…

Ever since his first EP dropped in the summer of 2010 on Infrasonics, Leeds producer Jamie Grind has been turning heads for the right reasons. Following his debut EP, Jamie has gone on to release with labels such as Wall Of Sound, Fortified Audio and EMI, alongside doing remixes for high profile artists like Professor Green, Misha B and Roll Deep.

With the promise of fresh music on its way, we quickly caught up with Mr. Grind for a chat just before the busy summer festival season arrives, and touched upon topics including musical influences, his past as an MC and what the future holds for the producer. Amongst other things…

You’re from Leeds, how has that influenced your musical style and production?

Everyone says it’s grim up north, so maybe the weather gives me that slightly dark, retrospective take on UK garage. Ha. Fuck knows man. I’m not sure how it’s influenced me other than the fact I was never really around a lot of people who were making similar music, so what I come up with is generally a mish-mash of styles.

You’ve collaborated with other artists such as Hackman in the past, how do your collaborations come together and what are the pros and cons of collaborating versus working solo?

The collaboration with Hackman was mainly due to him living in Leeds at the time and we were both making similar stuff, it seemed like a good link up. The collaborations I’ve had just generally come about by simply chatting/sharing beats with people who have similar tastes in music. Over the past year or so I’ve been working with a bunch of different vocalists, I’ve found it’s always good to mix up your workflow from time to time and take yourself out of your comfort zone to get a new perspective on shit.

You’ve tried your hand at MCing in the past… how does that inform your production and are you ever tempted to pick the mic back up again?

I don’t think I’m ever going back to that now, I think that ship has sailed, ha. I started producing originally as I was sick of relying on producers to make me beats, and being the control freak I am, I wanted to do everything myself… it just so happened that when I started making tunes, I had more fun making garage. I still write a few lyrics down when I hear a sick beat, just for fun, but there’s no point recording it as I’ll never be that good!

We also hear you’ve been the frontman for a few bands in the past?

Yep. I look back at it now as training for what I’m doing now, i.e. touring and performing live, recording, releasing shit. I’d always dabbled with a bunch of projects, I don’t think I can ever be just a fan of something, I have to actually make it and I think that notion probably extends to most areas of my life.

What other UK scenes/cities are you feeling besides your hometown of Leeds?

Bristol is always good, and obviously London. I don’t think there’s much of a scene anywhere now though really to be honest – scenes have just kind of amalgamated, it’s weird. I still listen to a lot of grime, and keep up to date with what’s going on there, the Midlands are pretty much running that at the moment.

Where can we catch you playing in the near future?

If you’re up north, you can catch me at Tramlines – for more dates just check me out on Elastic’s site.

What else do you have in the pipeline?

It’s been ages since I’ve had a release but behind closed doors I’ve been crafting loads of new tunes – I’ve been holding them back but will hopefully get a chance to unleash them at some point in the very near future, so keep locked – they’re definitely coming and I’m convinced this is going to be my best music out to date. 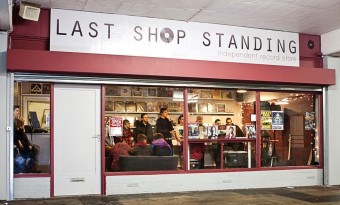 A raft of record shops have opened in the UK since Graham Jones first published his book 'Last Shop Standing'. He asks the new owners why they did it...
Read More