Liars have created such a prominent narrative of the unexpected around their releases that listeners have begun to anticipate sudden or startling directional changes before each new album. And yet despite this, and despite having an extensive and varied back catalogue, Liars aren’t as fanatically liked and followed as other bands with a similarly large and diverse output. So, just to get the ‘surprise’ out of the way: this Liars album is dominated by synthesizers. But it’s Liars, so it’s so much more than some wacky synth to shake up the fans.

Mess reminds me a little of the remixed Sisterworld album – that’s the one that looks like it should be good because Thom Yorke and Atlas Sound are on it and then actually turns out to be quite shit. But this time round, it’s Liars doing other artists doing Liars. This, in combination with a psychopath’s mental narrative.

Opener ‘Mask Maker’ is post-trauma Hot Chip’s take on Liars: “I like your face” could be a great little Hot Chip line, it would be all cute and beepy, but pop the words into some Liars sauce and that’s a creepy-ass dish right there. The opening lines of the album really are pretty nightmarish: a distorted voice gives increasingly unsettling orders until a few lines in it demands you eat his face off. This is a voice you cannot disobey, so get ready for some face-stew. The track bumps into a creepy groove that is way catchy, incorporating interesting noises – including a cough frozen in a jutting loop for a few seconds – and then dissolves into a melody that would make a great alternative Addams Family theme tune.

‘Vox Tuned D.E.D.’ continues the dancefloor killer theme and is just perfect for live shows, with its vast sound and ripped bass. It ends in a double-layered noise fest, and in the three seconds before the track closes a mechanical keyboard choir is suddenly revealed. It was there in the substrata the entire time, forming the bed of the track, and I love the subtle way it just sat there unnoticed until Liars decided right at the end of the song to pull the ear to that sound, those creepy little metal voices that were with you the whole time.

An exploratory analogue air bubbles up into ‘I’m No Gold’, then melts through a Benny Benassi ‘Satisfaction’ filter (you know the one: “Push me / And then just touch me / ‘Til I can get my / Satisfaction”). The track spits up more of the vaguely menacing synth melodies that Mess revolves around, getting lower and lower, then pausing just long enough to present on a little plate the sound of a human desperately gasping for air before continuing as before.

‘Pro Anti Anti’ – reminiscent of Rammstein’s ‘Du Hast’ – is loud and kind of badass. Some people find it necessary to judge each Liars album on a scale of 1 to punk based on how much it sounds like debut They Threw Us In A Trench And Stuck A Monument On Top and every other hint of ‘punk’ since. This track is a good reminder that the whole exercise in random obsession is completely pointless. Liars aren’t conventionally punk or post-punk, but simple and effective proof that the lasting legacy of real punk is an effortless attitude, not a sound style. Just a big fat fuck you attitude. I’m wallowing in these kinds of pretentious thoughts and getting really stuck into the sticky blood cult cave that ‘Pro Anti Anti’ dissolves into, when ‘Can’t Hear Well’ drops in.

This song couldn’t be more of a surprise. It indulges in pure melodic feeling while remaining uneasily detached, and the vocals, which have been becoming steadily clearer up to this point throughout the tracks, are masked again. The track comes through a filter of insecurity, gentle words of melancholy (“Fly home, fly home…”) come out muffled and distorted. A little conscience sings to some inside ear, then the song fades out with repetitions of “can’t hear well…” crackling through.

After this piece of gold we’re back onto murder avenue with ‘Mess on a Mission’. Psychotic repetition dominates this track too, but in a different way: “facts are facts and fiction’s fiction” rings out in a clear voice like some kind of desperate self-convincing plea, while arcade bleeps frantically dot the background and a completely incomprehensible voice yelps in tongues.

‘Darkslide’ is one of the most interesting tracks on the album. The clashing time signatures of two, and then three, differing – and barely complementary – industrial rhythms combine to create a really complex track. As a massive electronic fan I find it completely absorbing, but it is also potentially the most alienating song on Mess. ‘Boyzone’ and ‘Dress Walker’ continue this more futuristic electronica, with the latter featuring little pops and squirls clicking through a clapping rhythm.

The close of the album gives me more fodder for my theory that this record could be read as Liars remixing themselves through other artists’ personas (‘Perpetual Village’ could be Thom Yorke and ‘Left Speaker Blown’ is totally TV On The Radio – seriously, just you try and tell me they’re not). Both tracks tune into a more cerebral feel, making up 16 minutes between them, abandoning the dark humour of the beginning of Mess, and the wayward electronic indulgence of the mid-section of the album. ‘Left Speaker Blown’ is exceptionally silky and fluid, with drone guitars pulled out beneath a scattering of tinkling light melody. It fades into a tense voice giving orders that sound like they come from a doctor – “Say the word limb / Say the word shove / Say the word fine / Say the word dime…'” – and then once again the rug is pulled from under the listener’s feet: the tape recording of this man speaking ends, and a woman speaks to a third party. It convinces me that there is a narrative to this album, but maybe I’ve walked directly into a Liars trap.

Whatever the case, Mess is a truly interesting album, developed with Liars’ trademark pensiveness and humour (at least, I’ve always thought they have a touch of black humour about them). It offers so much in the way of interpretation and narrative, both thematic and musical, that it is ultimately just another great Liars album to treasure and come back to time and again. 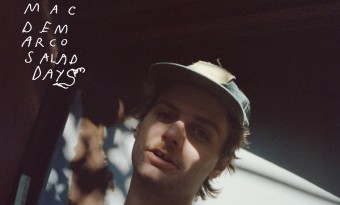 Mac Demarco is famous for his mischievous disposition and ironic Limp Bizkit medleys, but does 'Salad Days' mark a newfound maturity? Or is it just the same old Mac...
Read More