Share this article on:
When:
I could be imagining all of this…

I’m actually not too hot on jazz. I love what I love, and could probably produce a pretty tasty mixtape or two, but I don’t really know much about the history or structure of it. I know that story about one particular trumpet solo being the birth of modernism in jazz, and I can find you a Duke Ellington track with an amen break running right through it, but I couldn’t hold my own in a proper conversation with a proper jazz fan about jazz. I say this mostly because an old muso colleague of mine scoffs any time I mention Polar Bear (or any of Seb Rochford’s projects) and imply that they are jazz.

Of course, Frank thinks that Miles Davis going electric was a bigger sin that Bob Dylan doing the same, and he’s clearly wrong. Bitches Brew could eat you for breakfast.

These are the sort of thoughts running through my head as I wait for the music to start in a packed cabaret-style Komedia basement. I’m looking forward to the show, but I’m dreading having to write about it. Scared of upsetting an imaginary gang of jazz luddites. Worried that I’ll make a claim that doesn’t pass muster.

The support act Shiver, a Leeds-based three piece, come on stage and immediately remind me that these days, it’s all in a blender anyway and it really doesn’t matter. I’m not sure if it’s the triumph of post-modernism, or just a shift in the way that we listen to music, that makes eclecticism more accessible than the tribalism made necessary by scarcity and isolation, but it’s good to be reminded that today music is all over the shop.

Shiver open up with a few fast-paced, very pizzicato guitar loops, and an off-kilter digital drum beat that reminds me of a hyped-up, sample-free edition of The Books, before slamming into something much more reminiscent of the playful mathrock of Battles. Even this drifts into something more like Scandinavian post-rock (I’m thinking of Sickoakes and that one insipid Jaga Jazzist album) before collapsing into a heavy metal noodled guitar solo. In just thirty minutes the band manage to crash through a dense expanse of music, that even has time for a guitar that sounds like a synthesiser crying over some eighties dystopian cinema.

The bass player attempts a Squarepusher-esque bass solo, that is appropriately in the midst of something that sounds much more like that artist’s technoid heyday. The sum of the parts is a riot of tonality, that never sounds anything less than tight and structured. The drummer astonishes, holding the melee together with some incredibly taut playing, happily bouncing between styles, beats and genres, and providing a rock-hard backbone to even the frilliest guitar parts.

‘Blutey Shiney’ is a stand out moment. Woozier on record (see below), it plays like a funk backing track that is slowly trying to eat itself. It cuts itself up in a way that’s reminiscent of so much deconstructive electronica, but maintains the rawness and energy of living, loud and brutish music. Chris Sharkey seems quite honest at the end when he notes, “that’s how that one goes, at least today”. This is immaculate, but not over-performed or rigid in any way.

After a short break Polar Bear appear on stage and the band leader, Seb Rochford, hides at the back, sitting in a corner behind his drums, listening to the drifting ‘Open See’ that kicks off their latest album. Without anything to hit, it’s hard to tell if he’s bored or meditating, but the stage is set beautifully. An expanse of water drifts in front of us, flecks of colour added by the twin saxophones and bass. The electronics at the side appear to be holding sway, at least until Seb slowly creeps forward to signal the start of something different. He starts playing the drums before he’s even got upright enough to be on his seat, and it kicks the action into ‘Be Free’.

I want to clarify that Seb Rochford both looks and talks like a slightly too serious child who has been thrown into a bush. He says he called the song ‘Be Free’ because he likes it when people are free. He introduces the next song, ‘Chotpot’, by explaining that it’s about that feeling when you’re up at 3am watching Youtube videos, and are no longer capable of concentrating. He seems genuinely alarmed when it suddently occurs to him that he might be imagining this whole thing, but he takes the existential panic as an opportunity to kick off the song, which ends up sounding like a jazz inversion of a soca anthem. It works, the pounding rhythm pulling in and out of focus, occasionally overwhelmed by the electronic version, which in turn recedes back into the percussive gymnastics of the man with the big hair.

It’s during the conjoined ‘Lost in Death Parts 1 and 2’ that the show cracks a little. The programmed elements of the track don’t quite sync up, and it suddenly feels like an awkward pitch to be combining looped electronic tones with the improvised textures of the rest of the band. It’s normally fine, but for a while it sounds jarring, and turns the stage from a swathe of beautifully interlocked music into a bunch of people randomly making noises. It’s like looking behind the wizard’s curtain and being shown that the magic isn’t really there.

But it’s only an occasional problem, and for the most part the illusion is concrete. The players dance around each other so that they are more than their sum. The musical construct does not appear to consist of separate elements, just a wall of undulating noise and beauty. The second half of the set is mindblowing, particularly the track ‘Maliana’, which pounds relentlessly forwards, bouncing between rhythmic and melodic textures, sax parts swirling around each other with everything working together.

One of the saxophonists, in silhouetted profile at least, looks like an evil Freddie Mercury (face on he actually looks more like a French Nick Cave, which is an entirely different proposition). He manages to work himself into enough of a steam that at one point I’m faintly worried I could have fallen into a David Lynch film. In a later track, when he drops to his knees and starts blasting his bassiest noises into the monitor to give him some extra feedback to loop, I can think of nothing except the scene in Jeffrey Eugenides’ Middlesex where a character plays clarinet directly onto his nude partner’s body. The sensual intensity of those torrents of noise become almost physical, and the effect is sublime.

Each of the last few tracks manage to reach into this place, where music isn’t just a set of noises, but a place you inhabit. I stop being able to draw comparisons, and just get lost in the relentless joy of the impossible to describe.

It’s this last twenty minutes where I see the jazz I wanted to see. The thing that defies any definition, and just asks you to take pleasure in noise. It’s what I’d been told I could expect, and it’s what I get. 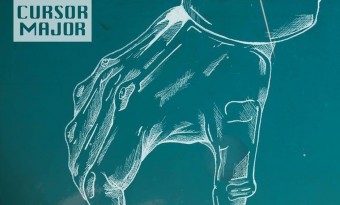 Cursor Major turn this Bristol boozer into a cartoon dive bar from The Jetsons, with a little help from The Walk Uprights and The Blunderbuss Press...
Read More