Willis Earl Beal doesn’t do music videos, or indeed anything, by halves. The last of his promos we featured, the six-and-a-half minute animation ‘Principles of a Protagonist’, was less a music video and more an experimental film. Similarly, ‘Coming Through’ feels more like a Harmony Korine short than anything you’d ever see on music television.

The scene is set straight away. “In 2013, a new underground movement of consciousness was founded in the desert of New Mexico – this film is all that remains,” reads a grainy VHS title screen. “The Church of Nobody Presents: A Journey Towards Enlightenment or Otherwise”. Clearly we’re in cult country, and we’re soon treated to a series of shots showing various followers wearing t-shirts based on the artwork of Beal’s ‘Nobody’ album, some gleefully squealing, “I’m a Nobody!”, others over-excitedly giving the sinister statement, “I’m ready to enter into nothingness”.

In something of a twist, albeit one that nicely frames Beal’s uncomfortable position between being portrayed as an outcast while performing on Jools Holland and signed to XL, Hollywood actress Mischa Barton turns out to be one of the new recruits. “I don’t really know how I ended up here,” she admits, “but there’s a buffet with orange jello”. For his part, the master of ceremonies himself only ever appears in a ski mask. “Willis has just really been taking care of me,” Barton tells the camera, but she flinches at Beal’s searching touch.

It takes about seven minutes for the actual music to start, and when it does, its jauntiness is almost incongruous. However, Beal’s deep preacher vocals do sound incredibly evangelistic, and the shots of the Nobodies dancing are great, not least when one wheelchair-bound cultist discovers he can
not only walk but get funky too. On the day of reckoning they’re led into the desert, where at Beal’s command they begin grinding against the ground while looking at pornography – the final shot sees Barton orgasming while clutching Beal’s sketch of them together.

What isn’t in dispute is that Beal, an ‘outsider’ artist who has Cat Power singing on his singles, a man who speaks of abandoning the self while constructing a career based partly on self-mythologising, a musician whose music only seems to feature in his videos as an afterthought, is one of the most intriguing acts around right now. As unpleasant as shagging the desert might sound, it’s nigh on impossible not to be drawn into his cult… 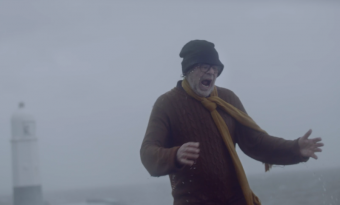 You might not think it's a particularly inviting time of year to visit the beaches of South Wales, but this video might just change your mind...
Read More