Melbourne’s electro-lounge maestro Chet Faker has been so ubiquitous over the last couple of years that it comes as something of a surprise to realise that he still hasn’t released an album. What the hell have you been up to all this time, Chet? Grooming your admittedly resplendent beard? Adding to your equally impressive collection of field recordings? That was what we were initially asking, until we remembered that it’s actually still less than three years since his notorious cover of ‘No Diggity’ spread all over Hype Machine like a flesh eating virus.

Clearly a series of singles and EPs, as well as collaborations with the likes of Flume and Say Lou Lou, have made it seem like he’s been around for longer than he actually has. Nonetheless, commercial appetite for a long-player has been building in his native Australia and beyond, which should see the record shoot up the charts when it’s released. The fact he’s already sold out London’s Village Underground for a launch gig in April would seem to suggest so anyway, while he’s been getting plenty of attention Stateside too.

Still, even if forthcoming debut album Built On Glass flops like a rotten cucumber, the outstanding video for new single ‘Talk Is Cheap’ won’t be forgotten in a hurry. Beginning with an appropriately Wintry scene of settled snow, the powdery stuff soon disperses to reveal the man himself encased in ice. Fortunately for the frozen Faker, the distant sax and jazzy keys of the track itself are apparently warm enough to melt it, and he’s soon free (if admittedly pretty chilly-looking) to start singing along.

As he does, the forest starts growing around him. Plants sprout, butterflies flutter and creepy-crawlies scuttle about like he’s some sort of woodland deity replenishing the environment around him with his healing song. Sadly this also seems to drain his own life away, and the forest soon grows over his expired visage leaving him buried like a Green Man in the undergrowth, before the snow returns to complete the cycle.

It’s a beautiful piece of work, and if Built To Glass can match these visuals musically we’ll have a treat on our hands. The record was apparently recorded entirely in a converted cooling room in North Melbourne’s meat market, but by the sound of ‘Talk Is Cheap’, he hasn’t butchered his tunes too brutally. We look forward to sampling the final cut…

Hold the Kerosene: Chad VanGaalen's back 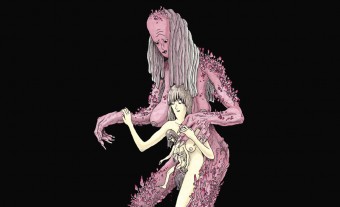