Whales in Cubicles’ debut offering ‘Death In The Evening’ is sure to be something of a head turner. They’re either on track to become the acceptable face of commercial rock, or the commercial face of indie rock, and I can’t quite tell which side they fall furthest on. Previous comparisons to Pavement and Pixies still stand; echoes of ‘Gouge Away’ can be heard on ‘I Knew It’ and ‘Golden Medal’ wouldn’t sound far out of place mixed in with Pavement’s ‘Slanted and Enchanted’ album. Besides that, however, the production quality brings to mind some of American Indie’s ‘shinier’ bands (think Death Cab for Cutie, maybe even Jimmy Eat World), and this really gives their sound a commercial edge that sets them apart from their grittier London peers.

On the whole, it’s a very American sound. I mean, halfway through the album there’s a track that sounds made for listening to while driving through Arizona in an old open-top Chevy. It’s title? ‘Across America’. Lyrical content? You guessed it. This isn’t so much a criticism, because it’s a sound that they are clearly comfortable with and this album showcases just how accomplished they are in that area of music.

They don’t seem to be restricted by the sound-world they exist in either, as evidenced by how diverse the three singles (so far) from this album are; ‘We Never Win’ has a rushed desperation to it, driven from start to finish by the off kilter snare-based beat. ‘Disappear’ almost strays into punk-pop territory (à la Lemuria), underscored by a jaunty acoustic guitar. ‘Nowhere Flag’ is back into Pavement-land, complete with ‘oo-oo-ooh’ vocals and a tailor-made ‘indie floorfiller’ beat.

Analysis aside, it’s quite an exciting album. It feels like commercial rock with sweeteners instead of sugar, all the fun and none of the indie guilt. It’s immediate, eminently listenable and, while like any album it has its lulls (In future I might skip past ‘Wax and Feathers’), it has a fantastic killer-to-filler ratio. Would recommend. 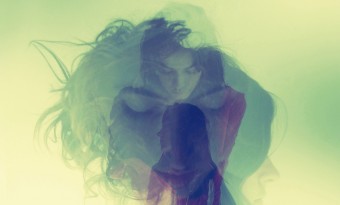 Warpaint's new album is backed by some big artillery, with Flood, Nigel Godrich and Chris Cunningham all involved. But does their presence effect the enigmatic intimacy of their music?
Read More