Sometimes, while skimming press releases and trawling the internet for music videos to stick up on this ‘ere site, it seems like directors barely bother with anything so complicated as a plot, concept, subtext, or anything that involves even a hint of imagination. Instead, the default seems to be, “bollocks to all that, let’s just film a girl writhing around in as little clothing as possible for three minutes”. The result? You end up with a video that has nothing to do with the music and just looks like a slo-mo replay of a Victoria’s Secret model suffering an epileptic fit.

Of course, this shit has been de rigueur in mainstream pop, dance and hip-hop videos for some time, but it’s increasingly seeping into promos for guitar bands as well, despite indie music being traditionally the third least sexy music genre after Bluegrass and Gregorian Chanting. Which is how you end up with VICE-approved art-porn enthusiast Richard Kern directing music videos for Is Tropical, seemingly convinced that tits = cool, even when everyone involved looks dead behind the eyes (we’d post a link, but it doesn’t deserve the fucking views).

Anyway, it would appear that Brighton duo Blood Red Shoes have also been effected by this continuing trend. “A lot of different people pitched ideas for this video and it was mind blowing how sexist many of them were,” reveals drummer/vocalist Steven Ansell. “With that in mind, and the current state of pop music videos, we came up with something fun that wasn’t just us standing there playing instruments. We got a naked, running businessman and stuck two fingers up at sexism in music by swapping gender roles and having [guitarist/vocalist] Laura-Mary [Carter] play a mugger and me playing a jilted bride”.

A noble intention, although admittedly any political points are largely lost in a bizarre video, directed by Brass Moustache, that fortunately happens to also be extremely entertaining. “Kick me out of this uniform / I don’t what I’m wearing it for,” Ansell sings, and the suited star of the vid would appear to be similarly inclined, as he is only too happy to strip naked when Carter demands his clothes while brandishing a snow-globe. We have no idea what the snow-globe signifies, nor what the hell is going on generally as the risqué runner continues his journey, stopping only to interfere with confused mechanics and charity fundraisers before properly Hulk-ing out at the end.

And it doesn’t really matter either. The lead actor’s manic glee and deranged expressions go perfectly with the driving pace and catchy hooks of the single, and it all helps to place ‘An Animal’ into that sacred lineage of songs about how shit day jobs are, somewhere in between ‘Cardiac Arrest’ by Madness and ‘Work. Work. Work. (Pub. Club. Sleep)’ by The Rakes. For that, and for letting their imagination run wild in the video rather than resorting to boring, base bullshit, a heartfelt ‘salud!” to Blood Red Shoes.

ADDITIONAL: We just got sent a link to the B-Side of ‘An Animal’, featuring Eoin Loveless of Drenge (who produced one of our favourite albums of 2013) and Ian Clement of Belgian outfit, Wallace Vanborn. It’s a pleasingly riff-heavy accompaniment to the A-Side, and you can hear it below (and pre-order it here). 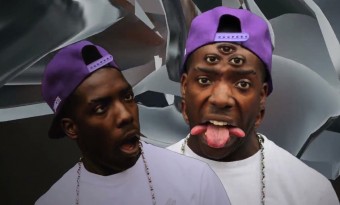 Who's doing it like this Midlands duo right now? Not as many people as there should be, as proven by this brain-batteringly brilliant video...
Read More