Who’s doing it like Lenkemz and Slick Don? Not you apparently, according to the Brum-based MC as he lays down a furious, hilarious guest spot on fellow Midlander Lenkemz’s banging grime number. The video is as manic (and magnificent) as the track, with insane animations and visual effects triggering a race between your eyes and ears to see which melt first.

Our favourite moments? Slick Don rhyming He-Man with Zidane, being inserted into a cartoon vagina, and throwing some kind of fit which sees him morph into a three-tongued beast with teeth all over his face before being swallowed by a gigantic floating head. And that’s before he turns into a character from the classic arcade game Rampage. By the end, everything – the video, the music and your mind – is in pieces. The man’s right; no one’s doing it like these guys right now. Although they should be. 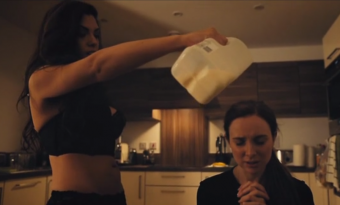 Experimental folk musician Gemma Williams temporarily (we hope) departs with one of her finest songs, killing off her incredible Woodpecker Wooliams alter ego in this stylish but extremely dark video...
Read More