On Christmas Day, in between the lie ins and witnessing Danny Dyer join EastEnders, there was a pretty major blip on TV screens across the UK. It was the uneventful and unrequested return of daytime music telly on the BBC. Yes, Top of the Pops came into horrid view, with its traditional Led Zep theme tune being shat out of the world’s worst Zombie Nation impersonator app.

Sadly, you can no longer watch it all here. Sorry, did I say sadly? I meant fortunately.

The half-arsed audience applause, Reggie Yates looking like he’d rather not be sat on a sleigh; it all adds up to impending doom. It even looks beneath the skills of Fearne Cotton, who’s known for her in-depth interviews with the likes of Peaches ‘I’m With The Band’ Geldof:

The white confetti stopped just in time for John Newman to perform that Northern Soul number he did earlier in 2013, which is OK, mainly because it just sounds like some Northern Soul.

Chase & Status came up next with a track that sounds exactly like a dodgy mid-’90s house tune. At least they seem kind of relevant in a BBC1 sort of way, and the crowd look like they’re generally enjoying it.

In at 8:43 is Boyzone.Rizzle Kicks seem to be the only performers having some genuine fun, lyrically sitting somewhere between Russell Brand and The Mirror for social commentary.The first instalment of the yearly highlight run down included this:

Me neither.’Get Lucky’ and ‘Blurred Lines’ last for all of ten seconds, which is, er, lucky.The rest of the show went on at this grinding pace for a full forty minutes more. It featured Tom Odell being dull, Jessie J being a low grade cabaret act, and a Bastille track from The Big Weekend getting repeated for the millionth time. The Saturdays’ tune was the sort of thing Vice would reference in a Big Night Out piece. James Blunt. The Christmas number one was the X Factor winner’s number; it’s become so predictable I think it’s worth just not caring anymore. There have been some pieces floating around the music press recently lamenting the end of music telly (Jools Holland, with short series runs and late night airings, barely counts), but to be honest, when it’s this boring, why would we want it back? The biggest album by a UK artist this year was Arctic Monkeys, and they got a two second mention. Discloure were easily the runaway mainstream producers of 2013, and I don’t remember them even getting a look in for the full hour. The US gets Ty Segall on morning TV, we get re-runs of will.i.am tracks only Yates’ DJ mates care about. Kanye West remains one of the most talked about hip-hop acts in the world and nadda about him, or Jay Z, or Beyoncé.All of West’s fans are keeping up to date with him through his mad interviews, Jay Z’s latest album landed straight into his fans’ palms on release day, and Beyoncé’s were given a glut of unexpected video clips for Christmas.Why would we want to sit down for half-an-hour every Friday again when we could plug a laptop into the telly and stream YouTube clips, or take our Spotify playlists onto the train? When the majority of music-loving teens and twenty somethings are more interested in clubbing or sweaty pub gigs, the TV bods thought a Boyzone reunion demanded our eyes and ears.Either TV doesn’t care about music, or it just can’t figure out what it should do with it (which would probably be the first instance of the music industry looking ahead of the curve for about two decades). In any case, involved music fans just aren’t looking to TV for inspiration, and TV isn’t offering them any reason to return.It’s not exactly Simon Amstell on Pop World, is it?Nicholas Burman

Playlist: Our favourite tracks of 2013 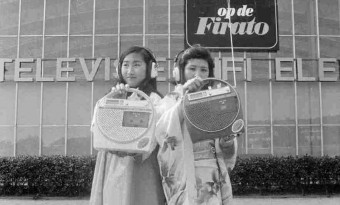 As the year draws to a close, we want to stop blethering on at you about what we think you should be listening to, and just let you listen to it instead. So sit back and deftly shove our definitive 2013 playlist down your lugholes...
Read More