On a chilly Saturday back in May, the organisers of Sound Tracks Festival, an event which saw musicians playing various venues along London’s East London Line (and on the trains in between them), lost their collective minds and left me in charge of their Peckham stage. With no event management experience, nor anything to sustain myself over the 14 hour shift beyond a bucket of cheap beer and a vegetable samosa, my hopes were not high. If the Bussey Building wasn’t engulfed in flames by the end, while the bands burned to death inside, I was prepared to consider it a success.

Yet to my surprise the event went off with barely a hitch; I had to replenish the rider a few more times than was probably professional, but both the bands and the (thankfully plentiful) punters all seemed to leave smiling. Except, that is, when The Leg were playing. When, halfway through their set, I got a text from my stressed-out stage manager saying that six people had just left the venue, complaining that they couldn’t handle the music.

It probably doesn’t speak particularly positively of my event management skills, but I ignored the text and carried on watching what was, for me, the best act of the day. Indeed, having become obsessed with last year’s An Eagle To Saturn album, I’d recommended booking the Edinburgh three-piece purely out of my own selfish desire to see them play live. Which I would have felt just a little guilty about, if it wasn’t for the fact that the vast majority of audience members had not only elected to stay, but were visibly enjoying the show too. Quite a few were even dancing. And during an early evening performance in London, that’s no mean feat.

The band themselves appear used to splitting opinion. Frontman Dan Mutch admitted afterwards that he’d been surprised by the largely positive response – “usually when we play people just run away” – and even their own web address is self-deprecating: ihatetheleg.co.uk. And to be fair it isn’t too difficult to see why. Stern drummer Alun Thomas’ percussive intensity and hirsute multi-instrumentalist Pete Harvey’s distorted cello can be distressing enough, but when you factor in Mutch’s twisted melodies (sample lyric: “what part of fuck off, Bruno, don’t you understand?”) you’re left with a brew as abrasive as frequently as it is brilliant.

Maybe I’m just a sucker for divisive bands, but The Leg scratch an itch other bands can’t even reach. The rest of the office might not agree however, as I only managed to get halfway through their new album, Oozing A Crepuscular Light, before a cease and desist order was paper aeroplane-d onto my desk. I was forced to enjoy the rest of the album on headphones, and indeed have enjoyed it a dozen times since. Because that’s the thing – while it may not be easy for most people to ‘get’ a band like The Leg, once you do get them, you want to keep on getting them as frequently as possible.

Oozing…‘s opening track ‘Dam Uncle Hit’ sees the band at their impish best musically and most impenetrable lyrically (something about helium? “Melting jaundiced hams”? Literally no idea). Dizzying slide guitar and twisted cello conspire with each other like witches around a tiny cauldron, while the giddy upward slide into the chorus is a moment which any musician worth their salt should hear and think, “yes, I’m nicking that”.

The following track, ‘Lionlicker’, is probably the most gentle and playful The Leg have ever been. There’s tinkling piano. There are handclaps. And then there’s Dan Mutch asking, “have you heard about the Lionlicker?”. Well no, and judging by what he tells us about it next, we probably don’t want to: “What the fuck is that? / I don’t know what that is / Whatever it is it’s still breathing / Please don’t poke it till we know what it is / Leave it alone I think it’s dying”. The whole song is dangerously catchy, in that you find yourself absent-mindedly singing the main refrain under your breath in the street, which is probably a pretty creepy thing to witness.

The snarling, discordant crescendo at the beginning of ‘Don’t Bite A Dog’ is the point where everyone else in the office started begging me to turn the record off. Bastards don’t know what’s good for them. The title brings to mind the cult Belgian film Man Bites Dog, and there are worse cinematic comparisons you could make; uncomfortable, close to the knuckle and shot through with a certain black humour, they both leave you feeling slightly compromised.

‘Chicken Slippers’ then takes us from the Carnival of the Damned to the Circus of People Who Forgot to Take Their Clozapine. It’s like a reel of bizarre music hall footage running way too quickly, with absurdly fast vamping piano and manic percussion giving in to a crunching breakdown. “The gravity in Edinburgh is strange and strong,” insists Mutch. It bloody must be if it’s causing stuff like this to happen.

The slide guitar returns on ‘Quantum Suicide’, and indeed is sliding all over the place like a drunk man wandering into a toilet stall coated in frozen piss. Piano again plays a key role, although by this point it starts feeling a little overplayed, and I start getting pangs for the more prominent cello and banjo on previous records.

But it’s hard to get too full of anything on a 23 minute album like this, and before you know it we’re at the closer, ‘Celebrating Love’, which feels less a celebration than some sort of ritual sacrifice. The vocals, initially an evil humming, are sung-whispered with a furtive tension:

Then there’s a surprisingly delicate falsetto to finish…

“He always does his research”.

Call me suspicious, but I’m betting those jelly babies are laced with something deadly.

It’s a fittingly poisonous finish from a fiendishly pestilent band, and another completely unique (and fantastic) album. If you want to test your resistance to their potent strain of music, they play the Song, By Toad Christmas party on December 19th (in Peckham again funnily enough). They may cause you to flee into the night, they may inspire you to dance like a cracked-out ragdoll, but they certainly won’t leave you bored. 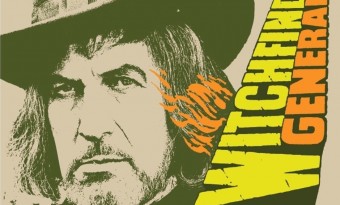