24-hour news channels and rolling Twitter coverage takes you somewhat ‘closer to the action’ nowadays, but also makes it all so accessible the sheer awesomeness and gravity of the bigger picture can get lost. As revolutions blossom and unstable governments are toppled (as written about by Paul Mason in his rather ace book Why It’s Still Kicking Off Everywhere), footage of riots, sit-ins, protests, gun fights and violent police tactics have virtually become daily viewing for anyone with access to a 24-hour news station.

It’s impressive then when such footage can hit the same nerve that was struck when you first saw anything like it. Even the well composed pieces of reportage on say, Vice, feels a little awkward in between tit jokes and articles about Miley Cyrus. We caught the latest video from Panoram via Matthew Barton, a documentary and film-maker whose recent work also includes a Nadine Shah video. After a recent trip to Libya he had some spare rabbit hunting footage from a trip he took with some armed locals. Retrospectively fitting Panoram’s atmospheric electronica with hints of Eastern tones to scenes of desolate desert and distant cityscapes, it’s a great example of how sound can improve image and vice versa. I sat down with Matt to chat about why he went over to Libya and how he went about putting the video together…

What took you to Libya?

I think I’d got to a stage where potent journalism wasn’t really affecting me anymore. I’d become a little desensitised by images of conflict, people revolting, people dying, famine etc., and so wanted to see first hand what it was all about. A journalist friend was also planning a trip to Libya and asked if I’d be up for shooting some videos and photos to accompany his writing for press coverage and the like. I spent a month as a photojournalist shooting a range of stories which were then picked up by Vice, Esquire and Dazed & Confused.

Who are the people featured in the clip? How did you meet them?

In the video there are two groups of people. The first you see by the roadside were a group of friends who decided they were going to take us under their wing during our stay in the tiny border town of Nalut. The footage shows the moments directly after a car crash we were in (Libya has the highest mortality rate on the roads in the whole world).

We were just returning from quaint picnic of stewed camel in the desert when this guy out of nowhere careers round a corner and narrowly misses a head on collision with the pick-up truck me and my mate were riding in.

The second group of locals were a bunch of farmers, mechanics and shop owners local to Nalut, who like to go desert hunting. There was no hotel in the town we were staying in and so word got around pretty quickly that there were a couple of journos in the area. You make friends pretty easily.

As a British film-maker, how did people react to you? Happy they were being filmed? Uncertain?

I asked if it would be OK to shoot the hunt, and they were OK with it. There was a real language barrier between us though, and when you put a camera into the mix it definitely takes you out of the situation as you’re more of an observer. It’s amazing how much you can communicate with a few words and lots of enthusiasm though. I think they enjoyed putting the Go Pro on the torch and looking at the footage afterwards too.

Obviously there’s been a lot of news on the Libyan crisis, what’s the atmosphere in the country like?

From recent coverage in the press it seems to have worsened since I was there in May. The country is in many ways lawless. Since the revolution, local militias have been operational throughout the country which means there are lots of different political points of view floating around. It’s also very easy to buy guns on the street in the big cities.

The only place I became genuinely paranoid was Benghazi though. Maybe it was because we were staying in the rough area but the adrenaline starts pumping when you go to buy some bananas and the local 14-year-old shop worker tells you to be careful of people with AK47s. To be fair we were treated very well by the locals on the whole and we saw some truly amazing generosity.

How do you feel the music fits the footage?

It was a treat working with the track. I’ve been a friend of Panoram‘s for a short while. I told him about the footage I’d shot and asked if he could send over a few tracks that might fit. He sent me his entire forthcoming Everyone Is A Door LP. I chose ‘Bad Request’ because it had a certain Eastern-sounding ethereal feel to it. I thought the juxtaposition with the alien landscape and the guns worked and so just went with it.

I take it those guns were real and loaded, how did you not shit yourself?

Yes definitely loaded, but we were out looking for rabbits so unless I had a crazy shapeshifting turn for the worst I was in safe hands.

The Darlingtons - Don't Give Me Hope 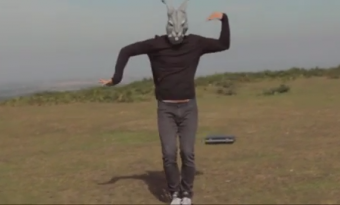 All sorts of beastly behaviour in the new video from the Somerset four-piece, as a rabbit-faced man is turned loose in the countryside...
Read More