When the X Factor tried to get some cheap press by devising a band called Kingsland, and then renaming them Kingsland Road after the East London hipster mecca they apparently ‘always hang out on’, and Harry Styles had a big showy Birthday bash in a public bar on said road, it seemed like the death toll of Dalston credibility had come in full blown apocalypse style. Despite some lazy marketing tricks though, there is still some magic to be found on what the locals call ‘The Strip’, one of the gems being East London based (as in actually live there, not appeared there for a photo shoot) Sheen.
There’s probably not a lot of venues between NW1 and N16 the band haven’t played over the past 2 years. After forming at uni the six piece (pretty mammoth set up in a world of solo artists and production duos) they quickly picked up steam as the recent re-awakening of the late ’80s Creation records sound started dominating the live music scene around their turf.

In true love-note style to the genre, dreamy, tremolo guitars float past a tight bass and drums set up to create a floating sound which never quite drifts away. Synths whisper alongside, stopping the sound from gaining too many gaps, while frontwoman Aneta Wrzos cuts through the noise with a distinct vocal style.

New track ‘Skylarks’ – which features an infectious group chorus of ‘way-oh’s – recently got premiered by go-to tipsters The Line of Best Fit, and an upcoming show at The Old Blue Last (where else?) will see them headline with solid support slots from Bright Young Things, Bare Pale and Post War Glamour Girls (who were ace when we saw them at Live at Leeds earlier this year). Likelihood is Sheen’s set will end with a couple of dismantled synths and possibly a bust guitar/nose or two. Those rising outros as heard on their current SoundCloud tracks really fume up to a rage in the live show.

I’d wrap this up with a snappy sentence saying Sheen are here to reclaim East London or something, but I’m not that snappy. Their Tumblr usefully informs anyone without a dictionary to hand that Sheen means ‘brightness, shininess, luster’. We couldn’t conceive a more appropriate name. 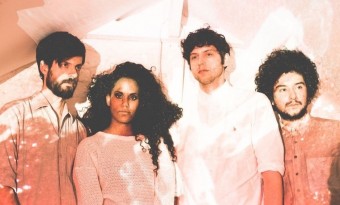 When Matthew Herbert gushes about how much he loves your music, you know you're doing something right. Meet South London's Hejira...
Read More