Album sales down! Album sales down! Album sales down! Oh, wait, that’s not a good thing. We hear ‘sales down’ so often in the UK now it just seems like part of the plan. And even with some pretty heavy releases recently, the music industry couldn’t escape the usual downward spiral. Interestingly, Sony and Universal’s Now! compilations are still selling, the latest one currently over the 800,000 mark. It does seem like the public’s appetite for individual artists is waning. Partly, perhaps, because people don’t have that much money, and partly because there’s just SO MUCH music out there.

Take a look at the Official Charts’ new releases. There’s over seventy new album releases this week. Seventy! No one can keep up with that volume of music, and a shrinking market can’t deal with it. That doesn’t even count the indie acts who haven’t bothered to be signed up for chart recognition either. Maybe, while pop acts are proving you can make a bit of money off of mechanical rights (the side of publishing which deals with the physical reproduction of music) and labels get a little cash injection from high volume sales, the indies should try something similar? The likes of XL and Domnio have some of the biggest artists in the country on their rosters, so they certainly have the reach for it, and using that ability to market a big compilation product could see their smaller acts benefit too.

Something else that went down this week was Silk Road, the ‘dark internet’s’ market place, where consumers could trade incognito, using Bitcoins to buy anything from weed, MDMA and dodgy Oyster cards to, more infamously, child pornography and guns. It was a very flawed beginning to what could be an interesting development in currency, i.e. the end of national currencies. Unfortunately, while the more liberal among us may be thinking “I can’t believe the US has gone all Stalin on this guy”, there is a transcript of the site’s owner, Ross William Ulbricht, requesting the murder of someone who was threatening to reveal the identities of Silk Road sellers. I mean, that guy is obviously a dick, Ross, but trying to find ways to actually kill someone? I’d rather know I’m getting done over by insane UK based tax dodging laws by huge multinationals and at least be in a position to understand the problem, than fund a man who is quite literally insane. If anyone else wants to give the idea a go, possibly with a more family-friendly atmosphere, we’ll be in queue to sign up.

And in the pop charts… pop music which isn’t half as interesting as everyone thinks it is. First up, the most self aware pop star we’ve seen in a while, Lorde’s ‘Royals’ has hit the top spot in the US. It’s a sort of nothing track with a sort of nothing video, and seems like a slightly newer take on that Birdy girl who no one now remembers. Minimalism is fine, but not when it’s dull. “Don’t you think it’s boring how people talk?” she asks on ‘Tennis Court’. Well yes we do, Lorde, yes we do.

Speaking of boring pop, L.A. sisters Haim are likely to be hitting the #1 spot this Sunday. Thanks to a shedload of magazine and TV coverage, including a cringe-inducing Andrew Marr show appearance where they gave David Cameron a verbal high five. It says a lot about Haim’s core fanbase that they haven’t been instantly disowned for sucking up to an establishment figure just to gain some press. The Britpop legacy lives on…

…and that legacy may be even more sinister than that, at least according to My Bloody Valentine’s Kevin Shields. In an interview with The Guardian, Shields suggests a secret government conspiracy behind the success of Menswe@r and Shed Seven (it would explain a lot, to be honest). “Britpop was massively pushed by the government,” insists Shields. “Someday it would be interesting to read all the MI5 files on Britpop. The wool was pulled right over everyone’s eyes there”. Later Shields went on to detail his prodigious drug use at the time. The two things are definitely not related.

Finally, while we’re loathe to give Miley Cyrus any more space on the internet, we couldn’t really talk about the week’s new without mentioning the current media storm around her. It all started when Sinéad O’Connor, who Cyrus had name-checked as the inspiration for her most recent video, wrote a slightly patronising but essentially on-the-money open letter to Cyrus, warning her against being encouraged to prostitute herself for success. Miley’s response was to post images of O’Connor tearing up a picture of Pope John Paul II, and posting tweets she’d sent two years ago while in the middle of a breakdown.

Now Cyrus is obviously a few flesh-coloured thongs short of the complete wardrobe, but this was a particularly imbecilic move. O’Connor, not one to take slights lightly, responded with a furious follow-up letter, denouncing Cyrus for belittling mental illness. She was also enraged by the Pope incident being represented as a lunatic act, rather than the protest against institutional Catholic paedophilia that it actually was. She ended her letter with a particularly withering put-down: “You could really do with educating yourself, that is if you’re not too busy getting your tits out to read”. Zing! There has since been a THIRD letter from O’Connor to Cyrus (“you ought apologise for joining those who mock and humiliate women who have been too nice frankly, to manage the music business without sensibly losing their minds….soon it will be you the media ‘crazy’ .. and you will not enjoy it.. and you will appreciate people (like myself) standing up for you. Which I will be happy to do.. if you earn my respect today by apologising publicly”). Amanda fucking Palmer, whose open letter urges immediately started tingling so strongly that she wrote this lengthy piece on her phone while en route to Dallas, then came out for Team Miley, equating her own experiences of being told not to go out in ripped tights by her Mum with a super-famous pop star and role model for millions fellating a sledgehammer. Meanwhile, notorious sleazebag photographer Terry Richardson’s balls started tingling too, leading to a photoshoot during which Miley bared some of the few body parts we haven’t already seen.

Sadly, this one’s set to run and run. And while we’re on Team O’Connor, we mainly feel depressed that Madonna did all of this thirty years ago and still nothing, absolutely nothing, has changed. It’s just as well Silk Road’s shut down, otherwise we’d be bidding for enough Oxycontin to knock us out for another thirty… 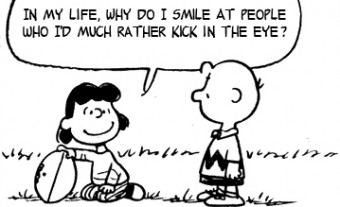 Plus: Madonna covers Elliott Smith, Godspeed rail against their own award, and how Amazon could independent record shops "within three years"...
Read More