At this point we may as well just set up a regular column for The Last Skeptik’s videos; this is the 13th (!) to have been released from his Thanks For Trying album (which crept into our Best Albums of 2013 (So Far) list). We featured his colourful, beautifully paced ‘That Old’ recently, but this is something completely different. ‘Well Well’, in the words of the man himself on Twitter, is “more mad than any other video you will ever see”.

It all starts off pleasantly enough. A pink-clad lady is contentedly preparing for a party, which means lippy, fake fingernails and a bit of The Last Skeptik on the gramophone. Oh yeah, and a huge dining table absolutely covered with birthday cakes of every hue. Obviously a raft of guests are expected. Except some time later no one’s turned up, and it all gets a bit ‘it’s my party, and I’ll writhe around on a sea of cake if I want to”. It reminded me of the amazing Greta Alfaro film I saw at the Saatchi gallery on Saturday, except with a funnier ending and less vultures. With three videos left to go in the series, The Last Skeptik has promised “they will keep getting more fucked up”. We can’t wait. 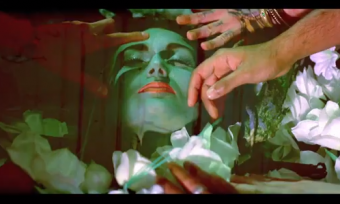