All across London, a repetitive whine is winding through the streets on a chilly breeze, like the mating call of a whimpering grouse. “Summer is over,” it repeats, in increasingly maudlin tones. “Summer is over”.

Yes, summer is over. And you know what? Good. Finally we’re entering autumn, a season far more suited to the character of these gloomy isles. While I have some sympathy for visitors and compatriots who were raised in warmer climes, for whom living here must be like being eternally trapped in a faulty shower that never quite warms up properly, the rest of us should know better. Face it, this is our climate in its truest form – nippy, middling and intermittently grim. And it should be celebrated as such.

For we are the nation that foolishly never wears quite enough clothes (albeit often intentionally). A nation whose skies camouflage both the concrete skyscrapers of the city and the slate-grey sea off the coast, making an unmarked tombstone of whatever horizon you happen to be facing. A nation plagued by wheezing clouds that perfunctorily piss their innards upon us, like misty pensioners aimlessly bumbling about the sky not realising they’ve lost control of their bladders. 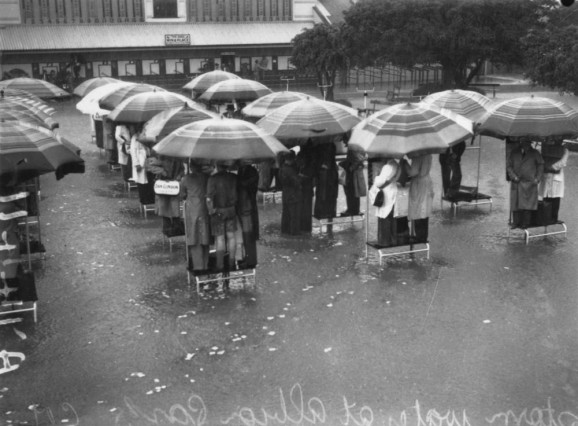 Despite its omniscience at this time of year, British rain operates within a surprisingly narrow range. On one side of the spectrum there’s a drizzle so slight it’s like the droplets have been sewn into swathes of soft muslin, that pass over you so gently you hardly notice them until you suddenly realise you’re dripping like a Herefordshire farmer’s overflowing muck bucket. Then there’s a harder (yet still half-arsed) breed of downpour, which feels more like receiving a thousand weak but irritating slaps from a close friend’s hyperactive eight-year-old, who it’s regrettably impossible to punch.

Yet this is what makes us what we are: slightly damp, and possessing the attributes needed to make stoic, gritted-teeth progression against adversity. And also be really fucking good at moaning, without which dialogue in the UK would pretty much reduced to ‘yes’, ‘no’, and ‘milk two sugars’. Only when we venture outside post-August do we see our country in its finest light. All our most famous landmarks – St Paul’s, Big Ben, the gutter near Leicester Square that Euan Blair got arrested for throwing up in – just don’t look right unless set against a grey backdrop, while a city’s beauty is often best reflected against the spattered window of a bus at night.

In more rural areas it’s the same. There’s nothing like the earthy smell of a wet forest, and a country walk isn’t the same without the satisfying squelch of fresh mud underfoot, as you take a final stride through our green and pleasant land before it collapses in a fracking disaster. And why is it so green and pleasant? That’s right, the rain you profess to hate so much, which keeps it verdant and keeps us from ruining it too much with barbecues and abandoned prophylactics. You know why we talk about ‘soaking up the sun’ when it’s hot? Because really we wish it was raining, forcing us off the beach and out of the beer garden, and into the drab, dingy rooms where we know we belong. The stained baize of an uneven pool table, the shower of sandwich crumbs cascading into the gaps of a computer keyboard, the creased cover of a neglected celebrity sad rag in a doctor’s waiting room, surrounded by sniffling children: THIS is Britain. 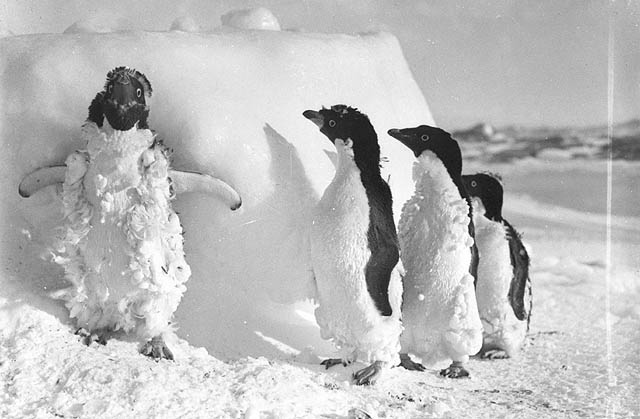 We can pretend to like summer, but our bodies betray us at every term. Our skin sneakily adopts a creeping puce coating as soon as it’s exposed to sunlight, and we start to burn and blister like we’ve been infected with a suncream scented bubonic plague (as with clothing, application of suncream is always slightly too scanty to be effective). Our unprepared sudoriferous glands start gushing salty waterfalls, and the alcohol permanently whirling through our bloodstream reacts to the heat in such a way as to boil our brain, making us both irritable and thick – a dangerous combination.

No, let us herald the arrival of cooler temperatures, celebrate the season of long jackets and thermal underwear, and worship our new sun, the one that lights up our island for a few short hours without emitting any discernible heat. For no British person ever achieves anything useful in the alien heat of summer. Need proof? Will the many musical tributes to our dismal climate do? Americans like Ann Peebles may not be able to stand the rain, but we surrender ourselves to it like a seduced lover, serenading it with lovingly composed odes. Stick a scarf around your neck, let your hot water bottle take a long drink from the kettle, and examine the evidence.

Britain’s most celebrated lyricists have all drawn inspiration from the later seasons. Ray Davies collects images of “dew soaked hedges…when the dawn begins to crack” in The Kinks’ ‘Autumn Almanac’, while Jarvis Cocker is so aroused by wet weather that he literally wants to shag it, in Pulp’s ‘Sheffield: Sex City’: “I just had to make love to every crack in the pavement…and the puddles of rain that reflected your face in my eyes”. Filthy, but at least a little more seductive than another man who gets hot when it’s cold, Magazine’s Howard Devoto, who wants to “drug you and fuck you on the permafrost”. Er, thanks Howard.

Elsewhere, Morrissey’s prancing priest dances “as natural as rain” in The Smiths’ ‘Vicar in a Tutu’, John Cooper Clarke offers to “be your raincoat, for those frequent rainy days” in ‘I Wanna Be Yours’, and Nick Drake imagines the season in admiring, feminine terms: “Gold and silver is the autumn, soft and tender are her skies,” he sings in ‘Milk and Honey’. Sandy Denny pities those unable to appreciate the changing weather in Fairport Convention’s ‘Who Knows Where the Time Goes?’: “Sad, deserted shore, your fickle friends are leaving…but I will still be here, I have no thought of leaving”.

This attitude is best summed up by possibly Britain’s best ever lyricist, Half Man Half Biscuit’s Nigel Blackwell. In ‘A Country Practice’ (see above), which also takes time to deride “bitter ex-soap stars who thought they could go on and do other things besides” and “that bobbing up and down thing that they do at the Proms”, he takes special pleasure in attacking “opinionated weather forecasters telling me it’s going to be a miserable day. Miserable to who? I quite like a bit of drizzle, so stick to the facts”. Quite right, Nige. There’s some natty wordplay in the The Who’s ‘Love Reign O’er Me’, with Roger Daltrey switching between ‘rain’ and ‘reign’ while insisting “only love can bring the rain” and clamouring for “a drink of cool, cool rain…love, reign o’er me”.

The Beatles dedicated a whole song to the substance. “If the rain comes they run and hide their heads / They might as well be dead,” they sing, shaking their heads, “Rain, I don’t mind”. The Sundays’ are also acutely aware of our curious relationship with wet weather. “England my country, the home of the free,” sings Harriet Wheeler in ‘Can’t Be Sure’, “Such miserable weather, but England’s as happy as England can be”. Scotland too, judging by Shirley Manson’s assertions in Garbage’s ‘I’m Only Happy When It Rains’. Kate Bush’s spirits also soar when she hears a patter against her window in ‘Cloudbusting’, “because every time it rains you’re here in my head, like the sun coming out…Ooh, I just know that something good is gonna to happen”. 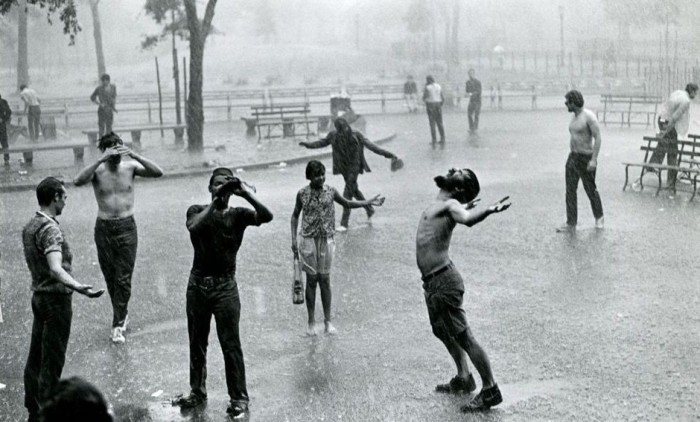 Some bands just seem naturally suited to soggy seasons. The Raincoats, Hood and I Am Kloot all spring to mind, and then there’s Radiohead, who famously implored the sky to “rain down on me” in ‘Paranoid Android’. Thom Yorke goes even further in his solo song ‘And It Rained All Night’: “It rained all night and washed the filth away,” he begins, getting his Travis Bickle on. “It’s relentless, invisible, indefatigable, indisputable, undeniable…so how come it looks so beautiful?”. No need to question why Thom, just enjoy it.

Or don’t. Mark E. Smith is a man who knows the value of a good grumble, and he has a special reserve of snide dismissiveness for anyone who doesn’t join in. “If you don’t say it’s very cold,” he rants in ‘Touch Sensitive’, “you are drunk or too old” (he’s no happier when it’s warmer mind, as evidenced in ‘British People in Hot Weather’, where he caomplains about a “beached whale in Wapping, his armpit hairs are sprouting”). Then there’s Travis’ infamous late-nineties whinge, ‘Why Does It Always Rain on Me’. However, like Smith, you sense singer Fran Healy actually enjoys griping. Just look at the video. Two-and-a-half minutes in, frustrated by the fact that, despite cloudy skies, it’s not actually raining, he takes a running jump into a nearby loch. “If you’re not gonna come to me, water, I’m gonna come to you,” he (probably) shouts. Look at his hair for pity’s sake; his love of liquid is so strong he’s grown a fucking dorsal fin.

Hopefully by now you’re ready to go out and gleefully leap into some puddles like a capering toddler. If not, here’s a playlist of wet and wintry British music that will hopefully help put you in the mood. And if you’re still having trouble, simply step out into the cold while calling to mind the first lines of Vashti Bunyan’s classic folk song, ‘Rose Hip November’: 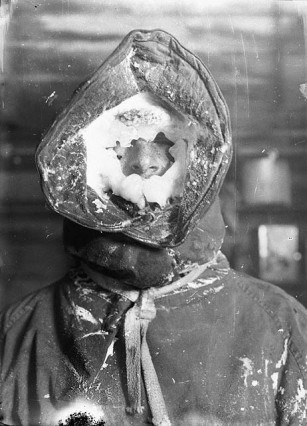 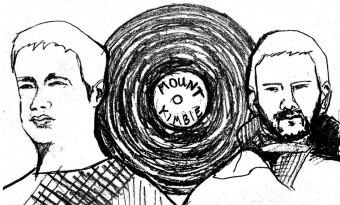 Read our interview with the sublime South London duo, and win some excellent Mount Kimbie goodies while you're at it...
Read More