We first saw these guys supporting Canadian hardcore lot Metz way back at the beginning of the year and every since The Wytches have had a spell over us.

Combining a gritty Stooges atmosphere with a grungey, Eighties Matchbox B-Line Disaster-esque mosh friendly set of riffs they’ve taken the recent garage revival and stuck a load of pulsating desert rock over the top of it for good measure.

The band are set to return to London this weekend to play at Visions Festival (Netil House, 3:10pm) and even with competition on the volume side of things coming from Fucked Up and Iceage later in the day we’re sure they’ll have no problem leaving an impression (and plenty of ringing in our ears).

You started the year being one of the most talked about bands on the live scene, we first saw you support Metz, how do you feel the rest of the year has lived up to that excitement?
The rest of the years been a bit better because we actually have fans who come to shows now. we still get people who are hearing us for the first time but after all the excitement, we’ve been greeted by a sweet fan base.

Are there any expectations you feeling you need to live up to?
Nah, I dont think people get it enough yet to know what our standard is. once we get more of our songs out (album and all that) then there will be room to anticipate..

You’re playing Visions this weekend – what’s the most terrifying vision you’ve ever experienced?
P.S I love you.

Who is Beehive Queen about?
No one specific. Like, a girl I know I guess.


Did you ever get your guitars back after they were nicked, and what would be your chosen punishment for the people that nicked them?
Unfortunately, we never got them back. I’d choose crucifixion.

How do you get that echoey guitar sound?
It’s an echoey secret.

What’s the shittest place you’ve played so far?
We played this place in Lincoln where you had to walk across the stage to get to the smoking area.

Your shows are sweaty and have a lot of energy, any advice to other bands who can’t conjure up the same magic?
Bring a towel and weed. 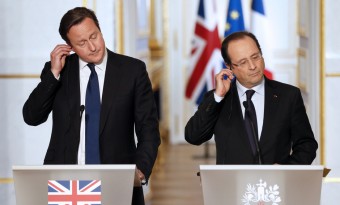 David Cameron's ten-track G8 compilation of British music has elicited groans from all corners. We analyse his predictably bland choices, and put together an alternative selection...
Read More