All of the hype surrounding GRMLN’s debut album, Empire, has made me think the band is supposed to be the new Best Coast or Wavves – which didn’t give me high hopes for their live set at last weekend’s Viva! Pomona festival. Sure, I like the album and have listened to it over and over, but the true test is how engaging these up-and-coming bands are in a live setting. They can usually get away with playing a shitty set by having good stage presence and charming the crowd into thinking they’re interesting people, but GRMLN felt very distant and probably wouldn’t have caught my attention if I had just been walking by.

They were off to a good start, opening with ‘Teenage Rhythm’ and causing about 20 kids to gather at the front of the stage and dance along. The energy slowed down for the next couple of songs but then picked up again when they played ‘Hand Pistol’. After that the show pretty much fell apart. The lead singer, Yoodoo, tried to engage the crowd by asking them to come up and dance to the next song, ‘Depressions’, but people literally jumped out of their seats and dashed to the Glasshouse stage. It was like a mass exodus. Then the kids at the front slowly trickled out and by the last song I was expecting a tumbleweed to go by.

I would like to give GRMLN the benefit of the doubt though, seeing as their set started just 15 minutes before The Lovely Bad Things were scheduled to go on (the cause of the mass exodus). That’s a lot to have to compete with so they were pretty much doomed from the start. To make matters worse, they were stuck on an outdoor stage that had terrible sound; I could barely even hear the vocals.

They somewhat redeemed themselves by closing their set with a song off their EP, Explore, and really whipping out the energy (seriously, all of the other songs they played didn’t have half as much excitement). This led me to believe that they have the potential to be a good live band if they put more effort into working the crowd and looking like they were having fun performing. It would probably help if they played in a different atmosphere too, such as a small 300 capacity club where a bunch of kids are squished together and can’t stop themselves from bopping their heads along to the catchy tunes. For now, however, I would say their music is more fun to listen to than to see live.

Atoms For Peace @ The Roundhouse 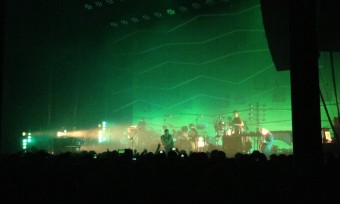 He may be getting people's backs up in the press, but onstage Thom Yorke and friends still know how to please a crowd...
Read More