While the global success of the dick-waving, Gaga-baiting rave-rap duo Die Antwoord has quite literally thrust South African music into the spotlight, most people would still be hard-pressed to name many of their peers. Those who’ve been paying attention will be aware of BLK JKS, Spoek Mathambo and Petite Noir, or the hyper rhythms of Shangaan Electro producers, but the majority will be hard pushed to name any of the nation’s artists beyond Ladysmith Black Mambazo, and even then mostly thanks to Paul Simon’s Gracelands album (Afrika Bambaataa’s Zulu Nation doesn’t count).

Obviously this in no way reflects the depth of talent that seems to be springing from every street corner in Cape Town and beyond at the moment, but even in the age of the internet it can be hard to get a grip of foreign music scenes from afar. So kudos to the British Council‘s Connect ZA project for sending acclaimed Flomotion / Late Junction DJ Nick Luscombe on a mission to discover South Africa’s brightest up-and-coming artists. As Luscombe admitted in this Telegraph article, “I was unprepared for the profusion of new music that has mushroomed, covering many genres — from punk, progressive and psych rock, to electro and futuristic hip-hop – with a whole load of great jazz, soul and dance music making up the mix”.

Thankfully, in order to condense this explosion into something more digestible, he’s made up his own mix – an hour of interviews and music that provide an ear-catching indication into the depth of talent that’s emerging out there. Featuring The Dollfins, The Brother Moves On, Nancy G, Planet Lindela, The Frown, Big Fkn Gun, Motel Mari, Christian Tiger School and Richard the Third among others, it’s the perfect introduction to the South African music scene. While the world’s media may be focused on the country as a raft of obituaries and eulogies to the great Nelson Mandela are pre-prepared in response to his worsening health, it’s a timely reminder that, as the icon of an era passes, the fruits of a new generation are ripening. While most media attention away from Mandela tends towards ANC corruption and Johannesburg car jackings, this is a timely reminder of the brighter side of a complicated country. 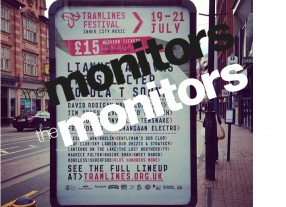 We preview this weekend's Tramlines Festival before heading to Sheffield to listen to music and seek out (wet) nuns...
Read More