Before attending his show at Elektrowerks my experiences of Vatican Shadow (AKA Dominik Fernow, who also records under his harsh noise guise Prurient) had left me distinctly uneasy, though probably not for the reasons Fernow would have wished. Although his stripped back take on industrial techno is duty rigged for causing physical upset, especially in a live setting, it was his presentation that tended to leave a sour taste in the mouth.

Vatican Shadow represents a move away from Fernow’s more personal concerns under his Prurient moniker and has seen him take a step into the muddy (not to mention bloody) waters of international geopolitics. His limited edition releases (often on his own Hospital Productions label) tend to come on cassette, packaged with militaristic imagery, and bearing titles such as ‘Atta’s Apartment Scheduled For Demolition’, ‘September Cell’, and ‘Iraqi Praetorian Guard’. They hint at some kind of vague globalised conspiracy and an engagement in contemporary conflict, but the music itself, being instrumental, offers no such clues, leading one to wonder if the hijacking of such imagery is merely for titillation. The latest in a long line of doyens of the noise underground, from which Fernow hails, engaging in shock for its own sake, apolitically revelling in the supposed ‘poetry’ of the detritus of very real conflict with very real consequences.

Seeing him play a show at last year’s Blackest Ever Black showcase at Corsica Studios forced me to revise my opinion somewhat, but, again, perhaps not for reasons Fernow would be happy with. Stripped of the visuals, one was left with the sight of a quite phenomenally angry looking fellow in camouflage gear scowling at a tape machine and occasionally sticking a torch in his mouth. Although this took the edge off his more controversial elements, I’m not sure broad comedy was Fernow’s desired result. The other problem was that without the visual heft the music was revealed as fairly lumpen. A succession of endless pummeling grooves without any sense of dynamics or tension. There’s a fine line to be trod when engaging in aggressive repetition and unfortunately, that evening, Vatican Shadow crossed to the boring side of it.

His latest album as Prurient had me intrigued, however. Through The Window is stripped, muscular techno from the word go and is as good as anything else released this year; an amyl nitrate powered night ride through some sleazy European city. Maybe this more electronic side of Fernow was capable of delivering the goods after all?

Bringing us to his show at Elektrowerkz, and a complete overhaul of everything I thought about this fascinating and occasionally teeth-gnashingly frustrating artist. From the first thumping kick pattern, Fernow is a whirl of motion. He claws the air, pounds his hands against his temples, exhorts the crowd to push harder like some demonically possessed aerobics instructor. The crowd respond too, and the front row is a bedlam of shaking heads and twisted grimaces as each thunderous drumbeat melds into the last. Occasionally Fernow glares down at his box of tricks and twists a knob, which surely lends fuel to the arguments of those who would ask what exactly it is he’s doing up there. But with this intensity on display it just doesn’t matter. He could be playing Frogger for all I care.

The visuals are back as well. Projections of screaming headlines relating to the World Trade Centre site, the Belgian cartooning controversy, car bombs, snipers, sea burials and road blocks. But far from appearing to court controversy, under these circumstances they make perfect sense and Vatican Shadow’s MO finally becomes visible. This isn’t merely the wind-up tactics of a ‘controversial’ artist, this feels like nothing less than a shamanic attempt to eat the evils of the world whole. Like a medieval sin eater, Fernow, with each tortured gesticulation, each and every roar into the darkness that can’t hear him, is attempting to heal. To give his audience a catharsis by breaking himself mentally and physically in front of them.

Okay, so maybe he just had some particularly excellent drugs before the show, but it is incredible how moving and intense the performance is. How it manages to skirt on just the right side of silliness and still remain unsettling and curiously uplifting. When the set crashes to an exhausting close the audience look wrung out and wild eyed. Knowing that, even if the reasoning and the specifics might escape them, what they’ve just seen was unmistakably and incorruptibly necessary.

The National @ The Roundhouse 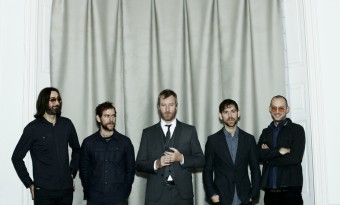 Are The National a bunch of whiny, earnest moaners? Yes, says Nicholas Burman, and that's why he loves 'em. Just keep the Kleenex handy...
Read More