Kanye’s ‘Yeezus’ may be the rap album everybody’s talking about after it leaked prior to tomorrow’s official release date, but while West may claim he gives “no f*cks at all” about the leak, his new “no strategy” strategy looks a little amateurish in comparison to his pal Jay-Z’s $5m deal with Samsung.

The phone company will be offering a million free downloads of Hova’s ‘Magna Carta Holy Grail’ album to Galaxy S III, S4 and Note II owners three days ahead of its official release date. Effectively, this means they’ve simply bought a million copies of the album for a fiver each. Considering that a tonne of copies would simply have been downloaded for free anyway when it inevitably leaks, that actually sounds like a pretty sweet deal for the rapper – a million guaranteed sales before the album’s even released. Once again Jay-Z shows himself to be a pretty canny operator.

Things aren’t looking quite as bright for his missus though. Music Week reported on Saturday that Beyoncé was forced to settle a lawsuit with a games company who claim she broke a contract to make an interactive singing game called ‘Starpower: Beyoncé’ in 2010. How much the settlement came to hasn’t been released, but seeing as the company, Gate Five, were initially looking for $100m, the injection of Samsung cash into the Knowles-Carter household couldn’t have been better timed.

Anyway, if you want to whet your appetite for the new album then check out the promo video below, which features Jay-Z, Pharrell, Timbaland larking about in the studio, while Rick Rubin lies on the sofa like he’s just walked in off the street after a a few tins of Special Brew… 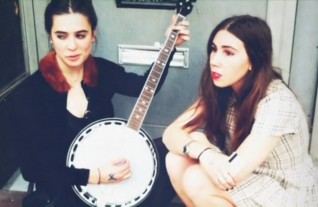 There's a fair chance that if you try and watch the above video you might find yourself setting light to your WiFi router shortly afterwards in an attempt to remove all traces of the horrific lack of dignity or self-awareness it contains. It's a promotional clip for a new Kickstarter launched by sibling duo Zosia and Clara Mamet, the actress daughters of famous writer/director David Mamet. Their pitch runs as follows: "We are two extremely wealthy and privileged young women. The prosperity and connections of our parents has ensured us a myriad of opportunities not available to most people, which has led to us enjoying successful acting careers and has also afforded us the time to toss off the odd bit of mediocre folk music featuring nothing but banjo, vocals and hand-claps (although we prefer to use the term 'body percussion', because we have no shame). Despite the fact that our song 'Bleak Love' can't have cost more than the price of a banjo, a microphone and a tub of very expensive handcream (all that body percussion can play havoc with your skin's moisture levels), we've decided we need, ooh, about $32k to produce the accompanying video that absolutely nobody has asked for or wants to see. Why? Well, it's the only way to afford all the "beautiful gowns" and "statues" we need to realise our "wonderful concept" in "a large opulent loft space" (not to mention the "extensive make-up" that will be involved). Oh yeah, and some grub and bus fare for the unpaid volunteers - scraping by on $32k for a three minute video unfortunately won't leave us with enough funds to actually, you know, remunerate anyone for their work. While our well-paid jobs, inherited wealth and the fact our stock has never been higher (what with one of us playing a role in HBO's much-loved series Girls) might lead you to believe that we'd have the means to fund this self-indulgent twaddle ourselves (not to mention already have access to most of the equipment and personnel we'd require), but we'd actually prefer not to part with any of our own money. Instead, we'd like you, a complete stranger, to contribute instead. The entire $32k. You. But you won't be merely donating money as if to some stupid charity. For $25 we'll throw in a digital download of our album (bargain, huh!), while if you're even richer and more deluded than ourselves you can pledge $8k in exchange for a chair that some people out of Girls have written on. Plus you'll have the sweet satisfaction of knowing that you're a patron of the arts. Sure, you could donate the money to a creative community program, underfunded state school music department, or just one of the several million musicians who need the money more than we do. But this way you get to see us arse around in over-priced dresses while thinking: "Yes. I am responsible for this". Before sinking back into your armchair as the sweet taste of cyanide hits the back of your throat, bringing with it the knowledge that this will be the last pointless act you ever inflict on the world." Well, we think that's what it says anyway. Yet for some reason the Mamet sisters - sorry, The Cabin Sisters (as clearly they were brought up in a woodland shack) - have so far only managed to reach $456 of their intended target. We can't imagine why. Still, there's eleven days to go, so get a-pledgin', music lovers! (p.s. Thanks to @cactushands for shoving this our way)
Read More