(That’s ‘rapper’, not ‘rape-r’, by the way. Although it may be worth saving that headline for the future…)

You’d imagine that Julian Assange’s Ecuadorian hosts would be totally over his sofa-surfing stint in their embassy by now: not paying rent, hogging the bandwidth and never nipping down the shops for more milk after he finishes off the last bit, you can envision them dropping hints along the lines of; “So Julian, any luck looking for somewhere new yet? You know, apparently there’s a room going in Sweden if you fancied taking a look? No? OK then…”

Apparently that’s not the case though. Instead they seem to be laying on plenty of entertainment for him, inviting over interesting guests and encouraging him to try out new skills…like rapping. Yes, that’s right, Julian Assange is writing a rap song.

Last week Puerto Rican rapper Rene Perez Joglar, aka Residente of the group Calle 13, called round to the embassy and the pair discussed writing some music together. Seeing as Calle 13 are known for their uncompromising political views and deep suspicion of the F.B.I., the collaboration does sort of make sense. Apparently they’re to write “an interesting song about the new politics as a result of internet and media distortion”. Sounds like a banger.

While Assange has yet to reveal his stage name for the project (we’re hoping for something along the lines of Weezy or Yeezy – ‘Sleezy’ perhaps?), you can get an idea of what the music might sound like by having a gander at the Calle 13 video below – which is even more enjoyable if you imagine it’s Assange leaping naked out of the window as Theresa May bangs on the door…

Fucked Up Immortalised in Breakfast 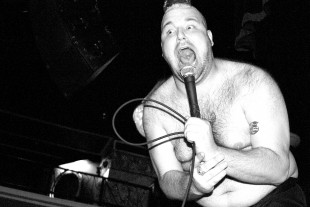 Canadian punk band have received the greatest accolade known to Canada - having a massive breakfast named after them. Two breakfasts in fact - which, considering the size of vocalist Pink Eyes, is entirely appropriate. One is a gigantic Mexican-flavoured dish, the other a gut-busting fry-up named, gloriously, after Fucked Up track "The Queen of Heart Attacks". If you possess a stomach capable of taking on these monstrosities, you can find them at Sneaky Dee's in Toronto. And on that note we're off to lunch, as we're suddenly very fucking hungry... 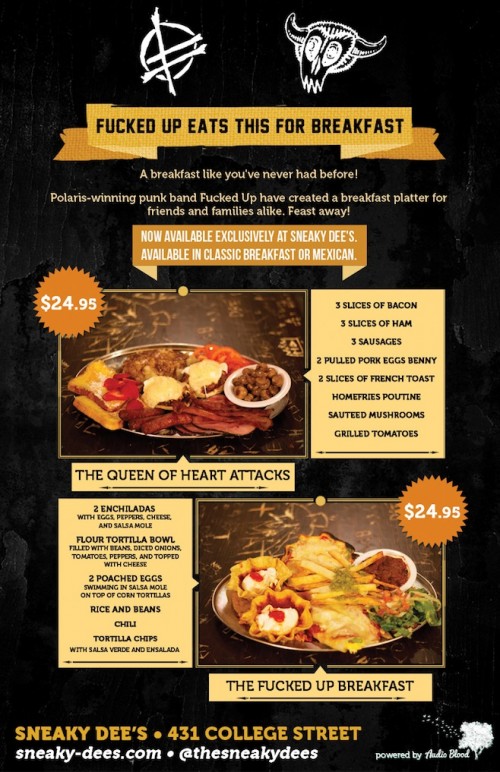