Without You My Live Would Be Boring – The Knife, Pan’s People and Pushing Buttons

I wonder if the Knife aren’t enjoying being famous any more. Perhaps ‘Heartbeats’ and ‘Silent Shout’ launched them onto a wider scene than they feel comfortable with, and now they’re trying to dismantle as much of their mainstream appeal as possible. People are calling the record pretentious nonsense, and they’re putting on live shows that people are walking out of. Something tells me they don’t mind.

I went to see them at the the Roundhouse last week, and behind me there was a man who spent a good chunk of the show shouting at Karin Dreijer Andersson to ‘do some singing’. After about ten minutes of pretending to play imaginary instruments made out of papier mache and tinfoil, the ten piece ‘band’ crossed their hands (and drumsticks, and glowstick bows) above their heads as the music burst on without them.

In case it wasn’t clear, the music was not being generated on stage.

They proceeded to prance about for the next hour and twenty. I’d been forewarned that the show was like a cross between Pan’s People, a cheap drama school production, and “Riverdance for cunts”. All these elements were present. The whole thing smelt of 70s Doctor Who, 80s aerobics, 90s acid and 00s titting-about-on-youtube. The vocal line was intermittently mimed by different people, to the point where I had no idea if Karin Dreijer Andersson was even on stage, let alone emitting noises from her vocal chords. I have no idea whether Olof Dreijer, Karin’s brother and musical partner, was even in the country.

It was well lit, and it looked like fun. Despite being cheap and amateurish, it was constantly shifting, often disconcerting, and genuinely funny. More than anything though, it was thought provoking. From where I was standing, the man behind me getting increasingly irate at his wasted thirty quid seemed the more absurd one.

What exactly are you paying for, when you buy a gig ticket? Where exactly does the authentic experience of live music lie? I’ve seen Matthew Herbert play with equipment scattered around different bits of the stage – in a tent or up a ladder – so that everything can go wrong and sound horrible, just so you know he’s doing it live. I’ve seen Orbital’s so called ‘best live show ever’ that’s basically just a fuckload of lasers and a Belinda Carlisle/Bon Jovi mashup. I’ve heard stories of Aphex Twin delivering live sets that have actually been generated by artificial intelligence on his computer, with him having no input whatsoever.

And most frequently I’ve seen hundreds of acts hunched over laptops, producing unexciting noise and providing nothing to look at but a glowing white apple (sometimes with a sticker over it for anti-corporate credibility).

And that’s just the electronic stuff. I’ve seen Born Ruffians play with a lead singer who couldn’t perform his set properly because his voice was too broken for high notes. I’ve watched Caribou just be incredibly fucking tedious. I’ve seen umpteen grumpy long-haired teenagers (or older musicians with the same mental age) staring away from the audience while they create new definitions of mediocrity.

The crowds though, we eat it up. We jostle to get to the front of the stage so we can be closer to the sullen faces of our ‘heroes’. We’ll happily stare at four people, in the same pose, going through the same motions: an endless simulacra of a tired cliché. We’ll get pissed off at the tall person in front of us, grabbing angrily at his lustrous curly locks (I get this a lot), despite there being nothing whatsoever to see.

What is a great live show? A horde of arseholes staring at a smaller horde of other arseholes.

That, obviously, is a lie – but a truly great live show should be a musical feat. Top of my list is the Boredoms performing ‘Boadrum’ with 9 drummers. The Knife had no drummers, but two drumkits, and I’m pretty sure someone was hitting a mega-cello at one point. But it didn’t matter. For me, it was incredible.

I’ve fooled myself into believing that Olof, the sibling responsible for the music, was actually tucked away behind stage somewhere adding a live element to the soundscapes. Part of me refuses to believe that it was purely a backing track. From the violently reverberating bass exploration at the opening – sounds that tore through your flesh and worried your bowels – to the relentless battering drums of ‘Full of Fire’, the music seemed too perfectly moulded to the space and the speakers to be entirely pre-recorded. Either way, the music was absolutely the star of the show. The sound was visceral and all encompassing. It wrapped you up and pulled your body around. It was everything I wanted.

So whatever the show looked like, it sounded amazing. Could it have sounded ‘more live’? I have no idea. What does that even mean, in a world where the music is generated not in echo chambers and vibrating strings, but by the twist of electrons on a circuit board? Why do people get angry when an artist acknowledges that they’ve made music that is going to make a dreadful live show if all they do is press the right buttons? Why do we celebrate people for making impossible musical structures, and then get upset that they don’t do a limp-wristed acoustic version in person?

The whole show seemed to demand a deeper definition of ‘authentic’, ‘live’ and ‘performance’. Famous for atmospheric, laser-laden audiovisual extravaganzas, The Knife’s sucker-punchline came at the end. They played ‘Silent Shout’ and revealed they still had the incredible laser box from their last tour – they’d just chosen not to bother with it till now. The tone of everything shifted as people gazed upwards at intricate patterns etched onto smoke by the perpetually re-arranging lights. It felt like a rebuff: ‘This is what our last live show was like, and it was just the same as this: distracting nonsense’.

That’s art. And you don’t get your money back if you think it’s shit.

Maybe the Knife have destroyed their reputation as great live performers. Maybe next time they won’t sell out all their venues in an hour. Maybe next time they’ll tour smaller venues, and be left with a hardcore of queers, freaks and weirdos that still love them whatever, the ones who get the gender-bent artifice of the whole thing. Maybe that was the point.

Also, it’s possible that I only enjoyed the show because I’d been forewarned. If I’d gone expecting lasers and darkness and I got Pan’s People and glitter, maybe I too would’ve been pissed off. But then, I once hitch-hiked to Germany to watch their opera, which they weren’t even present at, and it was still incredible. Maybe I’m the problem here. Maybe I just refuse to believe I wasted a healthy chunk of my meagre income on going to watch an episode of Top of the Pops.

But part of me knows that it was a brutal, powerful, intense and dark experience.

Part of me was transported, and that’s all I’ve ever asked of music. 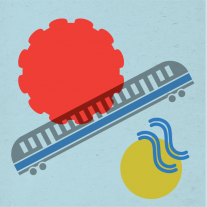 What do you usually experience after tapping in your battered Oyster card and hurling yourself between the loudly beeping train doors? Chances are you're either launched into a writhing, sweaty maelstrom of commuter-flesh or, if you manage to secure a seat, find yourself deposited between a man wrapping his gigantic jaw around a sloppy, stinking steak and potato pasty and a woman absent-mindedly peeling loose bits of skin from her scalp. And then eating them. When a frenzied pack of screeching schoolkids get on at the next station you try to block out their ear-splitting exuberance by resolutely fixing your gaze upwards; yet only endless adverts for dating agencies await you there, with each airbrushed, lovestruck smile simply serving to remind you of the crushing loneliness of your existence. But forget this nightmarish vision - it doesn't have to be this way. For one day of the year public transport isn't merely a method of getting to a destination - it's the destination itself. When the inaugural Sound Tracks Festival took place in 2011, the East London line metamorphosed into the city's most unique gig venue - not only were musicians booked to play shows at various venues along the route, they also performed on the actual trains themselves (the first time TfL has allowed such an event to happen), entertaining ticket-holders as they were ferried between Dalston, Shoreditch and New Cross. This Saturday Sound Tracks returns to the rails; and thanks to the recent expansion of the East London line it now extends all the way down to Peckham. On the trains there'll be talented composers vying for your attention rather than disaffected commuters scrambling for seats, with drivers announcing bands rather than delays. In fact, if it wasn't for the stunning line-ups being curated along the route at great venues like Dalston Old Boys Club and the Bussey Building, you wouldn't want to get off at all... Highlights include an appearance in the Bussey Building by fucked-up folk-punk miscreants The Leg, the first band yours truly ever wrote about on The Monitors, describing them as "a marriage between folk tradition and punk snarl; only this is a wedding where the church is on fire, the Vicar is on Buckfast and the bride has fled, screaming, into the woods", while other must-sees include local folk wizard Theo Bard, acid-brass nutters Off-Key He-Man, the darkly atmospheric singer-songwriter Dooks, the reliably raucous South Londoners the Dulwich Ukelele Club, and Woodpecker Wooliams, who recently collaborated with the composer of our Album of the Week, Ghostpoet (who DJed at the first Sound Tracks event). If those in the know are to be believed, it could be one of the last opportunities you'll have to see soul sensation Tawiah in such a small (and beautiful) setting as Dalston Roof Park too. With music and art events taking place at such incredible venues as the Geffrye Museum and the Brunel Museum's historic shaft, there's a hell of a lot else to see this Saturday. Better get your Oyster card topped up now...
Read More