The 12″ record that triggered a wave of speculation in the global easter egg hunt that was Boards of Canada’s promotional campaign for their new album, has sold on eBay for an astonishing amount. The seller, who discovered the record in the racks of a New York music shop on Record Store Day, paid tribute to the process his find caused: “Nothing will erase the experience of pursuing the answer this record made me ask”, said he, “and moreover the satisfaction of having that question answered by the hard work of my fellow nerds”. The cool $5,700 he received (just under £4000) may just about equal that satisfaction though.

It’s an incredible price for a new record to go for, but the fact it’s one of a kind, and the cultish following BoC attract, goes some way to explaining it. It also keeps the album it precedes, ‘Tomorrow’s Harvest’, firmly in the music news (we can’t wait here, to be fair). Meanwhile, FACT had an interesting debate about the whole process over here. 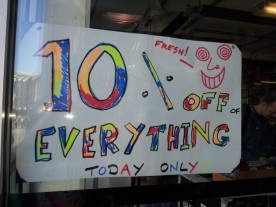 The lovingly-crafted sign above is taken from the Music and Video Exchange in Greenwich, where yours truly was working on Record Store Day last Saturday. Despite the fact we didn't have any of the (let's be fair, predominantly pretty rubbish) limited edition records on sale, we still came close to doubling our normal Saturday takings, thanks partly to the other record shop around the corner which was fully taking part, plus a 10% discount on all stock. It seems the business at our branch was replicated elsewhere: nationwide RSD album sales were up 60% on last year, with singles up 20%, while the average shopper apparently spent around £45. Eight of the ten best-selling vinyl releases over the week were RSD exclusives, while ERA chairman Paul Quirk reckons only 2% of releases have ended up on eBay. Yeah, we'd like to see where that figure stands by the end of the month...
Read More