In hip-hop, fat beats are the only ones that matter. You never hear people clamouring for skinny rhythms, or asking the DJ to drop a well-proportioned beat. No, like fry-ups or sumo wrestlers, the bigger the beat the better.

DJ Jab clearly understands this; he did, after all, name his record shop Fat Beats. Originally opening in Manhattan and at one point having shops in both Amsterdam and Atalanta, it sadly closed its doors in 2010, having been a pillar of hip-hop retail for almost twenty years. Trinity, a collaboration between Jab, AG (aka Andre the Giant, best known as the latter half of Diggin’ in the Crates Crew’s Showbiz and AG) and Brand Nubian’s Sadat X, was originally conceived as a way of promoting the shop, with their recent album “20 In” created so they had something to sell on tour.

The shop’s closure instead makes “20 In” a fitting tribute. A homage to the hip-hop scene that spawned, sustained and was celebrated by Fat Beats, the album has a distinctly old school vibe, enhanced by DJ Jab managing to convince Sadat X and AG to completely dispense with swear words. It’s a testament to their rapping that you don’t really notice.

Jab recently explained the process to Mass Appeal: “I pulled out the conscious sides of them and brought them back to the days when hip-hop albums existed and naturally there was no profanity on them. Almost every song has a purpose that I did some research on. I would propose the idea for the song to them and have facts to write on”. Thus you get tracks that run from ‘The Bronx’, a potted history of the NY borough from 1609 to the present, to observations on crack addiction (the flute-flaunting ‘Then & Now’) and fatherhood (‘Influence’, which could almost be a lost A Tribe Called Quest track).

The album is strictly old-school in every respect, which does mean that, at seventeen tracks, there’s a wee bit of filler. The highlights, however, come thick and fast. The organ-drenched ‘Rap Attack’ is a stone-cold killer, while ‘Corrupt’ makes good use of both saxophone samples and an appearance from Immortal Technique, gleefully spitting lines like: “You know when the cops are coming to get ya / Tryin’ to light you up like Nikola Tesla”.

Elsewhere, ‘Sometimes’ manages to fit an insane amount of guests into less than three minutes including Slug, Ill Bill and Grand Puba, while the Roy Ayers-sampling, Dilla produced ‘Sunshine’ is evocative of People Under The Stairs at their best. DJ Jab’s evangelism comes through a bit too blatantly on ‘My Way’, but that’s one of the few moments where it drags.

The love for hip-hop always shines through though, with Jab indicating in past interviews that he wants to reclaim it: “Hip hop isn’t thugged-out life or a ridiculous amount of tattoos or wearing your pants looking like a fool. That’s not hip hop. That’s a rap persona that people put on”. The future for Trinity may be uncertain with all three members having their own distinct paths, but if anyone’s going to reclaim rap then it might as well be them. 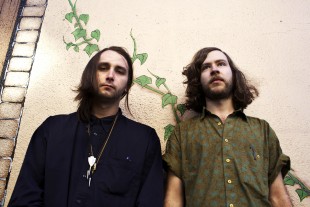 Many band's first forays into performing live involve getting booked by tight-fisted promoters to play tiny, deserted venues in return for, if they're lucky, a free pint of flat beer. Wampire's method of playing house parties in their native Portland seems a far better idea. Sure, you may have to play on a staircase and there probably won't be a soundcheck (like sound engineers at small venues ever pay any attention anyway), but at least you're guaranteed an audience; better, a wasted audience who'll not only be in a good mood but won't care if you end up taking a few experimental excursions (or just dropping a few bum notes) mid set. Cutting their teeth "in the corner" at parties certainly doesn't seem to have done Rocky Tinder and Eric Phipps any harm. Their music maintains that vibe of a couple of guys not clamouring for attention but having an infectious kind of fun on their own which other people can't help but have their heads swivelled by. Dubbed an "indie/goth/horror outfit" by Noisey, perhaps in an attempt to categorise them as some sort of Oregon Horrors, the duo's very name indicates they don't take themselves too seriously (apparently it comes from a nickname bestowed by a German exchange student with typically Teutonic 'v' and 'w' pronunciation issues). Instead they insist they simply "wanna be lighthearted and funny, playing shows, getting drunk with good people, and just hanging out". These ambitions have already been partially fulfilled by a successful tour supporting Unknown Mortal Orchestra and Foxygen, where they caught a number of ears by being friskier than the former and less irritating than the latter. While the prospect of yet another semi-moustachioed synth 'n' guitar band might set off some people's hipster sirens (and the fact they end many shows stripped down to their scruds may well put off others), there's a joyousness to their music that quickly dissolves any jaded cynicism. UMO bassist Jake Portrait produced their forthcoming debut album "Curiosity", and while Tinder has described it as a "weird" record that's "a little chew and swallow," the early signs are that, actually, it's gonna slip down a treat. Lead single 'The Hearse' sets up their schtick with a cheap keyboard imitation of an old horror organ escalation, but when the upbeat rhythms kick in, reminiscent of Here We Go Magic's 'Old World United', it's clear no Nosferatu could survive in such a sunny atmosphere. It even features a sprightly Kraftwerk cover on the B-Side. Then there's 'Magic Light', which sounds like Julian Casablancas lounging on a tropical island with a cocktail, surrounded by fairy lights while basking in the relief that he doesn't need to tour that dodgy new Strokes album. Meanwhile the remaining Strokes are busy drafting in Gary War to help finish off 'I Can't See Why' and thanking Christ he's gone. Then you have 'Giants,' which kicks off with a blistering psychobilly beat that boots you through the door of a House of Horrors, only for it to turn out to be a Tunnel of Love on the other side. Essentially it's a classic Scooby Doo episode in musical form. Of course, some of these tracks might sound significantly different on the album, which apparently saw the band, with Portrait, deconstructing each song and putting it back together from scratch. It's hard to imagine them turning out any way other than awesome. Considering the pair have been playing together since middle school, they'd be forgiven for feeling it's taken a little long to reach this point. Instead, Tinder is relieved, saying that he's glad that wider recognition has "happened now, because now we have a sound we’d actually listen to". It's a sound you should actually listen to, too.
Read More