So, Justin Bieber’s troubled visit to the British Isles finally came to an end last week, following a run at the O2 that took in diva strops, Axl Rose-esque timekeeping, dodgy ‘health issues’, a scrap with the paparazzi, and a celebration that turned into his “worst birthday” ever (all finely documented over at CMU). Pretty hilarious stuff for jaded celebrity-watchers, to be sure.

Still, while many Brits were quick to jeeringly direct a mass “waaaaaaanker” at the young Canadian when rumours surfaced that Bieber might never darken these shores again, the fact is the country has hardly covered itself in glory either. While no one’s disputing that Bieber is indeed a massive diddy, how do we look in the light of this tedious saga? Well, here are a few negative aspects that this farcical episode highlighted:

While Bieber was rightly blamed for many fans missing out his delayed performance on Monday 5th because they had to leave early, if the tube didn’t shut so ridiculously early many of those weeping Beliebers could’ve seen the whole thing. Seriously, the O2 is bad enough to escape from at the best of times, but it becomes a complete colon-clogger after midnight. Why they can’t have the relatively new Jubilee line run a little later when big events are on is a mystery.

2. Our plethora of gobshites.

All the usual suspects were quick to weigh in as Britain suffered a mild strain of Bieber fever. Joey Barton was at his Wildean best on Twitter, deriding him as a “little gimp” and predicting he was a “smack addiction waiting to happen” (although his description of Bieber as “a shaved little bird with earrings” is admittedly pretty good). Elsewhere, Noel Gallagher took time out from telling Muse’s drummer off for smoking an electronic cigarette at the BRITs to tell the world his suspicion that Bieber was probably playing bridge backstage, insisting his cat sounded “more rock ‘n’ roll” than the imaginary Bieber he’d just invented in his head. Of course, Liam Gallagher accordingly tweeted “Wow, yeah, Justin Bieber rules!” soon afterwards, dutifully playing the ‘simpleton brother you’d normally have locked in a basement’ role he’s perfected so well over his career.

The video at the top of the page documents the paparazzi run-in on Friday 8th, and while it’s fair to say Bieber both looked and acted like a knob, the fat waste of space that passes for a British photographer is a even worse. After receiving what looks like the flimsiest brush-off, he proceeds to tell Bieber to “fuck off back to America” (he’s Canadian, you dolt) before telling him to get rid of his bouncers so they can have one of the most mis-matched scuffles in history. While it would’ve been amusing to see the gentleman beating / eating the scrawny pop star, it really does remind you just what a stain on humanity much of our press represents.

While no one’s claiming Bieber’s young pals should’ve been let into Cirque Du Soir for his birthday celebrations, let’s face it – if he’d decided to have his bash in the majority of other British venues his underage mates would not only have got in but would’ve probably been offered a soggy wrap of shit cocaine in the process. Well, the female ones would’ve at least.

5. The fact we’re as thick as everyone else.

A lot of the mocking that’s taken place over the last week has had a distinctly self-congratulatory tone. “Everyone else may welcome him with open arms,” the nation seemed to crow, “but we told the little shit where to get off”. Except we didn’t really, did we. The guy packed out the O2 four nights running, on top of ten other stadium gigs in the UK and Ireland – he’s as popular with our spoonfed numbskulls as he is everywhere else. While his onstage fainting episode may well have been a pathetically fraudulent attempt to gain sympathy, there’s a chance it could’ve genuinely been the result of a young man’s physical and mental exhaustion after being hounded by our reprehensible, celebrity-addicted media, who glory in the mental and physical decline of public figures because the rest of us keep on lapping it up, like sour milk from the sagging udder of a barely breathing bovine atrocity. It’s like a bunch of kids torturing a hamster while touching themselves, and it’s hard not to feel sickened by both the mutilated beast and the slavering mob squeezing the juice out of it.

Anyway, the likelihood is that the rumours are just that, and Bieber will return to the UK at some point. You know why? Because, frankly, we deserve him. It takes a lot to sink to his level, but by gum we managed it. Good old Blighty!

Edit: Shortly after posting this, news arrived that Justin Bieber’s pet hamster Pac had died of chronic renal failure. Ignoring the weirdness of getting someone to work out a hamster’s cause of death (I remember when mine died – it’s stiffened corpse just turned up in the bin), there’s the nagging suspicion that the stretched metaphor in the penultimate paragraph above is somehow responsible. So, if you’d like The-Monitors to murder a pop star’s pet on your behalf using some sort of html-based voodoo, let us know and we’ll see what we can do. 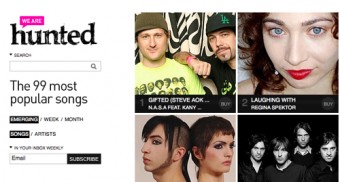 Twitter is the latest company to plan a move into music streaming, teaming up with Soundcloud to create an app for iOS. With their video app Vine proving quite the success so far, and having acquired music discovery service We Are Hunted last year, this news may not come as a huge surprise. However, with Apple and Google both planning to enter similar territory soon it's going to be a tough one to pull off, which might explain why, unlike Vine, Twitter's logos and branding will apparently feature prominently in the app as they try to engender loyalty in existing Twittererers...
Read More