The cover features female fingers in lace gloves running down the edge of a saw that looks like it’s seen some action – of what variety, we’re unsure. The product inside features guest appearances from possibly the most distinctive male voice in modern music. And its creator has released two previous albums, supported Robert Plant, and regularly performs in front of a backdrop featuring projections of mothers throwing knives at their own daughters. So why, whenever I stick on the latest album from Malmo’s Christine Owman, do people keep saying: “Ooh, what’s this?”.

While that album, “Little Beast”, may seem to have crawled out of nowhere, Owman’s actually been around for ages. Her first release was “Open Doors” in 2003, with the richly dark “Throwing Knives” following after a lengthy seven year gap. In between she’s mainly composed for theatrical productions in Sweden, the US, Canada and the UK, and it’s not hard to see how her experiences in this environment have informed her new album, which is imbued with a restrained but effective sense of drama.

This is most evident in songs like ‘Wait No’, which sees her prostrated as a bare, breathier PJ Harvey. The softness of her vocals shouldn’t be mistaken for submission though, as the lyrics may well ring true for anyone who’s been prescribed medication for mental health, or knows someone who has, with Owman’s delicious harmonies evoking the voices in her own head as she insists she’d “rather cope with my brain than forced to be sane / the medical pain / Rather stay in my brain / be quietly insane / than conventional and plain”.

Conventional and plain she most certainly is not; while her music may be low-key, her stage show is anything but. Aside from the obscure cinematic projections, she claims that while she enters the stage with “neat make-up”, by the time she exits she looks “like Alice Cooper. Sticky all over the face” (well, that’s how Google translates it anyway. Ahem.).

For “Little Beast” she enlisted a man whose stage presence can conversely be described as statuesque; not in the Keira Knightly sense (ha!), but because he barely bloody moves onstage. Still, anyone who’s ever watched Mark Lanegan play knows that even when static he has an inimitable intensity. Here, he reprises the gruff Lee Hazlewood role he played so well on his collaborations with Isobel Campbell, which makes the fact he first arrives on a track called ‘Familiar Appearance’ slightly amusing.

The song itself reads like an experimental play, with Owman and Lanegan stuck in a dialogue that could’ve been written by a Yiddish Samuel Beckett. “Are you disappointed with my answer?” asks Owman. “Am I disappointed with your question?” responds Lanegan. Obviously it’s destined to lead nowhere, but it’s enjoyable to listen to them not getting there; especially against a boldly sparse backdrop featuring a cello being played like a knife being sharpened.

Owman has admitted that if she were a man she’d want to sing like Lanegan, but while her voice is as smooth and subtle as his is loud and rasping, it’s perfect for communicating her stories. ‘Day One’ is perhaps the most devastating of these, detailing a woman desperately trying to convince her unborn child, and by extension herself, that she won’t turn to drink and drugs while her man is away at sea. There are elements of Jane Weaver, Hope Sandoval and even Lanegan himself in the way she creates an inescapable atmosphere armed with only the barest of accompaniment.

Luckily it’s an atmosphere you won’t want to escape. The closing track, ‘Your Blood’, is a perfect finish, its delicate refrains on cello and what sounds like a celeste conjuring the image of seeing yourself, in a painting, slowly fading away, like a twisted Roald Dahl story. “I’m tired of the singer/songwriter thing, it’s not enough for me,” she says. It’s not enough for us either. That’s why artists like Christine Owman are so important. Screw theatre, we need to keep her making records. 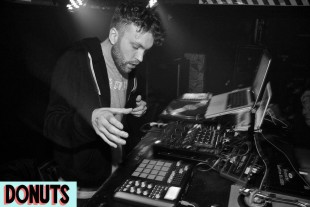 Derided by Yankophiles and overshadowed by the in-your-face stylings of grime, UK hip-hop didn't get much press at the start of the century. While occasionally acts like Roots Manuva or Ty threatened to pop their head over the parapet and make a dash for crossover success, a talented but undernourished scene featuring such talents as Jehst, Task Force and Skinnyman was frequently left to celebrate itself. Yet over the last few years an increasing amount of rapping pop stars like Plan B and Tinie Tempah have emerged, making British hip-hop harder to ignore than ever before; even if a number of them (Relentless bores Professor Green and Example, for, er, example) seem more about posturing and chart success then producing anything of lasting quality. Still, the shift in focus makes you wonder if someone like Jon Phonics may be ready to receive the credit he deserves. Hailing from Hemel Hempstead, the producer has produced beats for underground luminaries such as Verb T, Jehst, Kashmere, Fliptrix and Sonnyjim, yet his talent is such that over the last few years he's been slowly edging into the spotlight himself. This year has already seen him put out an incredible 14-track (!) EP, released on 50 limited edition cassettes (exclusively on Bleep) that unsurprisingly sold out straight away. While putting out a cassette is often the domain of the cooler-than-thou fashionista who wants to disguise the fact that they're not that popular, Jon claims that the decision came from wanting to make something "for kids in the suburbs with shit £500 cars that still have tape players in, like me". He also clearly doesn't take himself too seriously, claiming the tape was inspired after finding a bit of paper in a Greggs sausage roll that said "Rugers" on it, and describing his sound as "acousticspacefunkdustyelectroboombapwiggahop...like a chopped n’ screwed dreamscape cassette playing outta radio Raheem’s boombox". Which, hilariously, is not that far off the mark. "Rugers" flits between several styles but manages to never sound like it's over-reaching, whether it be channelling a spaced-out Madlib on 'Unrequited', which is like holding a champagne reception in your auditory canal, or concocting a cut-up synth splurge like on 'Kepler', which recalls THEESatisfaction's recent Anita Baker mash-up EP. Best of all may be current single 'FX WITH THE LIFE', a gorgeous, chopped and screwed effort featuring ItsNate, a man with a delivery as smooth as his apostrophe use is shonky, which might just be Britain's answer to A$AP Rocky and Clams Casino's celebrated collaborations. Except maybe better. With ol' Clammy Clams having been a bit off the boil of late, Jon Phonics may well have the pluck to take over his mantle, and without the danger of being locked into a trademark style either. "Rugers" gave fifty people a reason to hunt down AA batteries for their old tape players. Here's hoping that next time he'll release on a more convenient format, but if he decided to put out a sodding laser disc then we'll still be buying it. We suggest you do too.
Read More