Derided by Yankophiles and overshadowed by the in-your-face stylings of grime, UK hip-hop didn’t get much press at the start of the century. While occasionally acts like Roots Manuva or Ty threatened to pop their head over the parapet and make a dash for crossover success, a talented but undernourished scene featuring such talents as Jehst, Task Force and Skinnyman was frequently left to celebrate itself.

Yet over the last few years an increasing amount of rapping pop stars like Plan B and Tinie Tempah have emerged, making British hip-hop harder to ignore than ever before; even if a number of them (Relentless bores Professor Green and Example, for, er, example) seem more about posturing and chart success then producing anything of lasting quality.

Still, the shift in focus makes you wonder if someone like Jon Phonics may be ready to receive the credit he deserves. Hailing from Hemel Hempstead, the producer has produced beats for underground luminaries such as Verb T, Jehst, Kashmere, Fliptrix and Sonnyjim, yet his talent is such that over the last few years he’s been slowly edging into the spotlight himself. This year has already seen him put out an incredible 14-track (!) EP, released on 50 limited edition cassettes (exclusively on Bleep) that unsurprisingly sold out straight away.

While putting out a cassette is often the domain of the cooler-than-thou fashionista who wants to disguise the fact that they’re not that popular, Jon claims that the decision came from wanting to make something “for kids in the suburbs with shit £500 cars that still have tape players in, like me”. He also clearly doesn’t take himself too seriously, claiming the tape was inspired after finding a bit of paper in a Greggs sausage roll that said “Rugers” on it, and describing his sound as “acousticspacefunkdustyelectroboombapwiggahop…like a chopped n’ screwed dreamscape cassette playing outta radio Raheem’s boombox“.

Which, hilariously, is not that far off the mark. “Rugers” flits between several styles but manages to never sound like it’s over-reaching, whether it be channelling a spaced-out Madlib on ‘Unrequited’, which is like holding a champagne reception in your auditory canal, or concocting a cut-up synth splurge like on ‘Kepler’, which recalls THEESatisfaction’s recent Anita Baker mash-up EP.

Best of all may be current single ‘FX WITH THE LIFE’, a gorgeous, chopped and screwed effort featuring ItsNate, a man with a delivery as smooth as his apostrophe use is shonky, which might just be Britain’s answer to A$AP Rocky and Clams Casino’s celebrated collaborations.

Except maybe better. With ol’ Clammy Clams having been a bit off the boil of late, Jon Phonics may well have the pluck to take over his mantle, and without the danger of being locked into a trademark style either. “Rugers” gave fifty people a reason to hunt down AA batteries for their old tape players. Here’s hoping that next time he’ll release on a more convenient format, but if he decided to put out a sodding laser disc then we’ll still be buying it. We suggest you do too. 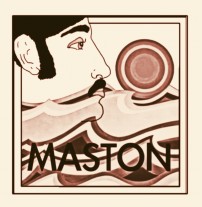 As someone who's worked in a second-hand record shop for several years, I can tell you that people who are obsessive about sixties music are often the most boring, dribbly-lipped morons you could hope to have mouth-breathe all over you while flicking through the racks (their breath usually smells like rotting Decca seven inch sleeves, in case you're interested). However, every now and then someone comes along who has channelled their love of that much masturbated-over decade into something sublime. Frank Maston is one of those people. His taste, based around the touchstones of Brian Wilson, The Beatles, Joe Meek, Phil Spector & Burt Bacharach, may have never made it much further than Altamont on the musical timeline, but rather than mould those influences into a charmless pastiche like so many before him he's created something that really does sound like a lost relic from the era. And not one of those "lost relics" that are listed for a hundred quid in Record Collector but sound like a stoned San Franciscan shitting on a tambourine either. His new album "Shadows" is an absolute beauty, and could hold its own against the heavyweights of that time. Expanding on some of the ideas hatched on his early cassette EPs (which in Maston's case feels like a pretty futuristic format; it felt a bit wrong buying the bloody album on CD to be honest), the imaginative instrumentation and analogue recording gear provide that much sought-after "authenticity" in abundance. The variety of sounds here is all the more impressive when you consider that Maston plays everything (save a single harp part) himself, taking the time to identify what created certain sounds on his favourite records and then learning to play those instruments from scratch. So far so Tame Impala's Kevin Parker, but unlike the celebrated Australian, whose records still have something of a modern sheen to them, you get the impression that if Maston had been around in the sixties he'd have created the EXACT same record.

It kicks off with 'Strange Rituals', a carnival waltz complete with hammed-up organ stabs and drunken brass, similar to Beach Boys curios like 'Three Blind Mice' or what the Doors might have knocked out when Jim Morrison's bloated ego wasn't around. Elsewhere, 'Looks' creates that ambiguous atmosphere of the best sixties psych, sweet and sinister at the same time like a beautiful trip that is only a bad tab away from turning into a nightmare, with some beautiful vibraphone laid on top of a clip-clopping beat. He must share a few favourite records with Daniel Rossen and Bradford Cox too, as 'Messages' works with the same beautiful melodies and harmonies as the Department of Eagles/Grizzly Bear man, while 'Judge Alabaster' feels like a less Tramadol-ed Deerhunter. There are elements of Maston's beloved Van Dyke Parks and Ennio Morricone in some of the arrangements too - he's claimed he's "gone months listening only to Morricone's "Diabolik" score", which is a pretty fine tutorial for any music-maker. Sometimes, when selling another sixties freak three separate copies of the same Beatles record just because they have different matrices, I feel like screaming at them: "Why don't you try something new?! You don't have to transport yourself into the 21st century straight away, but at least move on a decade or two! Try something by The Fall, or Grandmaster Flash, or Blondie, or just bloody anything that isn't "Forever Changes" for once!" However, in Maston's case I'd say the opposite. Stay there. Stay there in your sunny, paisley-shirted Californian time-capsule and keep producing this brilliant music. Seriously, if I ever see anyone give this guy a synthesizer I'll fucking shoot them. Play on, brother.
Read More