It’s fair to say that DM Stith and John-Mark Lapham were being somewhat ironic when they chose The Revival Hour for a moniker. An old-fashioned concept whereby self-styled prophets aim to drill the good name of the Lord firmly into their audience’s psyche (“like a hokey praise party”, according to Stith), the religious connotations are given uncomfortable congruence when you learn about the pair’s respective upbringings.

While Stith was raised a Wesleyanist, a Christian movement which required him to have his demons exorcised in church, Lapham was brought up in the Texan town of Abilene (he later escaped to Manchester where he joined The Earlies), a place so right-wing it displays a billboard proudly thanking George W. Bush for all his hard work in office. And if you think that sounds like a pretty intimidating start to life: Stith and Lapham are gay, too. “For both of us,” Stith recently told The Quietus, “the foil for distrusting the church has been through sexuality”. No kidding.

It’s not hard to root out aspects of Christian culture in the duo’s music. ‘Hold Back’ is a gorgeous gospel number which sees a full-bodied choir backing up Stith’s exquisite lead, while ‘Pyre’ is sung from the perspective of a demonically righteous church leader. At all times the music seems like it’s straining to match the sublime sense of scale that church music of all types often aspires to.

Frequently, it surpasses it. Choirs aside, the band employs a raft of musicians, including a brilliant brass section, to achieve a sound that makes you half expect your speakers to start ascending into the sky. On paper it all sounds very Spiritualized, but the music more suggests a mixture of Daniel Rossen‘s (Department of Eagles, Grizzly Bear) singing/songcraft and Elbow’s grandiosity. There’s a real willingness to experiment as well, with all sorts of studio quirks (most notably a disorientating snare delay that periodically crops up on their debut EP, “Clusterchord“) adding depth to a sound that is almost bottomless to begin with.

The result is an EP that is as exhausting as it is excellent, so it’s just as well we’ve got a month or so to prepare ourseves for the band’s debut album, “Scorpio Little Devil”, which is scheduled for release at the beginning of next year. It promises to provide a ‘revival hour’ like none other. 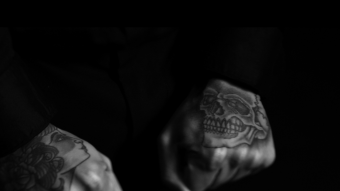 Generally when a new artist is suddenly deposited into our aural in-tray, it's not hard to find out more about them. Even if they don't arrive with an extensive press release full of shrill hyperbole about their 'groundbreaking' sound and carefully truncated quotes from some blog no one's ever heard of (ahem), a quick google search will usually turn up an internet radio interview, badly written Facebook biography or lengthy ramble from Paul Lester about how their music "induces ecstasies of ecclesiastical evanescence". Or something. However, a trawl for information about Elliott Power turns up hardly anything, suggesting that he's either just started making music or has a 30-strong PR team behind him, masterminding a mystique-building, 'less-is-more' marketing campaign. The video for his fantastic single 'The Thing' (see below) suggests the latter, as it's well-produced enough to suggest a decent budget behind it. Then again maybe he just has a decent camera and some talented mates. The good thing about this lack of information is that it allows you to focus more on the music, and the two tracks Power's made available (a third seems to have disappeared) certainly reward scrutiny. The sparse, blocky synths and pitch-shifted chorus of 'The Thing' sound as if they're wafting out of a backstreet club in the early nineties, with a shuffling, dancehall-tinged beat adding a little freshness. Best of all is Power's vocal style. His smart, succinct lyrics are delivered with a soft, crisply casual enunciation that brings to mind Tricky in his Massive Attack days. The more recent track, 'Non-Sequitur' (see Soundcloud above), starts off with a straight-up RnB hook that feeds into into a lush verse, drifting along on a dreamily haunting chord progression before finishing with a kind of G-Funk coda. Power declares himself, in his own lackadaisical style, "compelled by what I hear", which is something the listener can definitely empathise with. So what else can we deduce about him? Well, he has a moustache that doesn't look like it's a dodgy Movember effort. He likes messy nights out on saucy package holidays, or wryly observing them at least. His name reminds me of Homer Simpson's go-getting alter-ego. He may have taken these photographs. And, er, that's about it. Do we actually need any more information? Perhaps not, but we definitely need some more tunes...
Read More