End Of The Road is a great festival. In fact, it’s been one of our favourites ever since a proto-Monitors DJ team played at their amazing light-up disco in the middle of the woods two years ago. Yet as wonderful as the event is, it’s easy to become slightly fatigued after witnessing your 73rd bearded alt-country icon wailing yet another dusty paean to whisky and railroads, or your 74th twee wee lassie gently strumming a harp and warbling about…well, who knows, as by this point you’ve probably already fallen asleep under a passing peacock.

Fortunately, there are always a few bands you’ve never heard of that take you somewhere else entirely, and this year Pinkunoizu were the prime travel agents to another dimension. Though their name apparently means ‘pink noise’ in Japanese, the band hail from Copenhagen and are partly based in Berlin. With elements of Boris, Efterklang and Can in their music, this makes perfect sense.

Releasing their debut album, “Free Time!”, to quiet acclaim this year on Full Time Hobby, the band are now, judging by the warm reception they received last weekend, beginning to ramp up their profile in the UK. “Free Time!” is a sprawling but gentle beast – typically their songs start with a fairly simple refrain that is then allowed to grow at its own pace for as long as neccessary. As the band themselves admit, “sometimes we tend to play some long jammy passages that might be more fun to play, than to listen to”. It’s false modesty; if anything, the longer tracks are the ones prove more captivating, carefully reeling you in rather than bombastically knocking you out.

Live, however, they do pack more of a punch. While “Free Time!” only alters the dynamics where it is absolutely neccessary, almost wary of jolting the listener out of its spell, on stage they’re not scared to suddenly crank things up, adding a cheek-rippling stoner element to their spaced-out folk voyages. The band cite bewildering French philosopher Gilles Deleuze as a key influence – a man who once said, “If you’re trapped in the dream of the Other, you’re fucked”. Frankly, Pinkunoizu’s dreams are ones worth getting trapped in.

Death Is Not A Lover from Pinkunoizu on Vimeo. 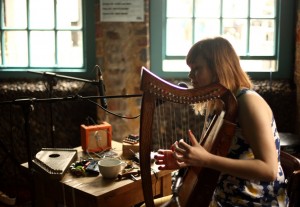 While we're not suggesting there's anything very good about having seizures, sometimes they can produce some spectacular side-effects. Some critics believe, for instance, that several of Alice's experiences in Wonderland were inspired by the symptons suffered by epileptic author Lewis Carroll, while great works by Van Gogh and Dostoevsky, not to mention the divine visions experienced by Joan of Arc, are also attributed to seizures. For Gemma Williams, they were indirectly responsible for the birth of a musical alter-ego, Woodpecker Wooliams (a name which gives our good friend Florian Lunaire a bit of trouble in our latest podcast). With her life turned upside-down by the sudden attacks, she relocated to a cottage cut into a Devonshire hill and chanced upon a "shop hiring out harps for pennies". Playing and singing seemed to help her health, and Woodpecker Wooliams was born. Initially her music dwelt, quite naturally considering the nature of her chosen instrument, on folk, but the lo-fi, scattershot nature of her early compositions suggested Dame Darcy or early CocoRosie as much as Joanna Newsom. Now, however, she's changed tack. Though still a one-woman outfit, her sound has expanded in terms of both instrumentation and lyrical scope, with new album "The Bird School Of Being Human" covering a whole gamut of issues from gender roles to passivity and violence, gloriously summed up in a recent press release as "a self-destructive hermaphrodite punching itself in the face". Lead single "Sparrow" showcases her new sound perfectly, all drum machines, digital claw marks and crazed keyboards within which Williams' plaintive vocals comfortably nest. It's a stormer, and if the rest of the album is as good then, once again, someone else's suffering of seizures will have gifted the world a fine piece of art.
Read More