Whereas once Antipodeans arriving in London were content to seek out the nearest bar and get a job behind it, now it seems they’d prefer to conquer our stages instead. Cameras (from Sydney) produced our last Album of the Week, and now SPLASHH have gone one better by actually relocating here from the sunny climes of Byron Bay. You can hear the band’s balmy origins in their music which is, by their own admission, “kind of about sun and girls”, whereas most British indie tends to be largely influenced by a distinct lack of either. So far their infectious, solar-dazed enthusiasm has remained undimmed by both a record-breakingly wet British summer and the addition of a bassist from Wolverhampton.

Then again the bands they most sound alike, Pixies and Ash (before they went shit), hailed from Boston and Northern Ireland which aren’t exactly gleaming sun-traps. Perhaps the influence of those bands takes precedence; to be honest, if Kim Deal was Apple she’d have sued the shit out of SPLASHH after hearing the bassline to “Headspins”, while the poppy fuzz of new single “Need It” could’ve been lifted straight off Ash’s debut album. Everything else is peppered with garage flecks and then coated in coastal sunshine.

Yet seeing as Wavves went over this sort of ground pretty recently, you’d be forgiven for pondering the point of it all. The answer? Reckless enthusiasm. Live, the band tend to win over the doubters by the first stage-dive (which is pretty impressive considering their first gig was only a few months ago), and they somehow manage to transpose that wanton delight into the studio too. The last great musical immigrant from Down Under was Nick Cave, who came with a duffel bag full of murder weapons and Cormac McCarthy paperbacks. SPLASHH’s satchel is full of suncream and skin mags instead. Now we just need a bit more sunshine to go with them. 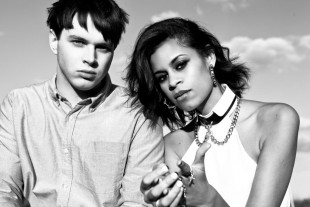 One look at AlunaGeorge shows you they're definitely not short on style - the London duo were featured in this month's edition of British Vogue after all - but for those of us who want more than just a glossy finish they're fortunately blessed with plenty of substance too. Their moniker, a portmanteu of singer Aluna Francis and producer George Reid's names, is not the most imaginative, but the mixture of their individual talents more than makes up for that. Ostensibly it's out and out pop music, shiny and silky on the surface but with a beauty that is more than skin deep. Just indulge yourself in the bouncy synths and twinkling glimmers of the perfect "You Know You Like It", or the Timbaland snaps and dew-drop vocals of "Just A Touch", and you're soon in deeper than a gambling addict desperately betting their last packets of cigs on olympic equestrian dressage. They have the moves (and the bass) to win over suspicious crowds when playing live too. While it's pretty rare for British acts to do the pop/RnB thing nearly as smoothly as their American peers, AlunaGeorge are the most convincing proponents of it since the original Sugababes. Hopefully they'll be a little more resistant to line-up changes than that band though; their name, if not the future of original British pop, depends on it.
Read More