It’s not a huge surprise to learn that Julien Mier’s music is influenced, not so much by other musicians, but by the sea. The 23-year-old grew up on the Dutch coastline, and there’s a trickling ebb-and-flow to his music that reflects his affinity to the ocean – not entirely a pretentious extrapolation by the way, as Mier himself describes water as “something inspirational…it moves and changes all the time”.

Releasing his first EP at the tender age of 18, the increasing progression of his music can be attributed to years spent studying music production. You just know he’s one of those guys who, when faced with a new piece of music software, manages to knock out a jaw-dropping beat with a few simple clicks and taps while you’re still struggling to work out how to turn the volume up.

His new EP, “When Will You Wake Up”, feels like the fruition of a formula he’s been working at for many years. Lead track “Watercolour Sky”, with accompanying video of a giant origami sky-squid, is a luscious mixture of warped electronics and jazz flourishes that will be familiar to fans of Flying Lotus. “Glide Sail Float” adds some charming vocals courtesy of Myrthe van de Weetering, while the bubbling, burbling beats of “Capsized” brings Mier’s watery essence to the fore. It’s a storming release (another triumph for Canadian label King Deluxe) and hopefully there’ll be more to come soon. Provided he’s finished his studies of course. 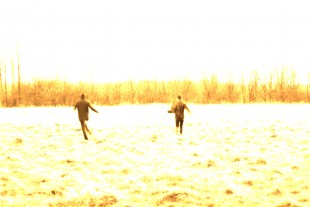 Last Friday, The Bowery was truly the only place to be in Sheffield. For it was there that Alt-J were booked to play, for free, as part of the city's incredible Tramlines festival. With the main stages not due to open until the following day, the band were definitely the biggest draw of the night with a huge queue forming hours before they arrived. All the more surprising, then, that in the end they were blown off stage by the two bands on before them: Kult Country and Manchester's G R E A T W A V E S. The latter in particular were hypnotically brilliant, managing to coax a huge sound out of the tiny venue that Alt-J just couldn't match. With the windows and doors of The Bowery wide open so that those in the queue could at least hear what was happening, they preceded to coax out the most succulent of slow burns that left everyone stunned. Despite not particularly sounding like either of them, the music is somehow reminiscent of both Spirtualized and Fuck Buttons, possessing both the grand emotional depth of the former and the booming sonics and occasional yelps of the latter. Plus, like both, they'd sound bloody great in a cathedral. While they haven't yet been quite able to match the heart-clutching intensity of their live sound in the studio, they're sure to carry on winning converts in concert until they find a producer that'll do them justice.
Read More