Dirty Projectors are masters of splitting opinion, seeming to irritate almost as many as they captivate. With Björk firmly on the “pro-DPz” side (she worked with members of the band on 2010’s ‘Mount Wittenberg Orca’ album), you know they’re unlikely to produce anything too conventional. Yet for some, their very quirkiness is the main deterrent.

It’s possible that the naysayers may yet be won over by their new album, ‘Swing Low Magellan’, which is probably their most straightforward to date. Are Dirty Projectors cleaning up? Of course not – there are still as many twists and turns on this album as on a suggested Googlemap route through the Welsh valleys. From the almost comically exaggerated humming n’ handclaps intro to “Offspring Are Blank” (which contains, in high contrast, a chorus more akin to something from Guitar Hero) to the squashed chords and table-tapping rhythms of “See What She Seeing”, there’s enough going on underneath the near-constant vocal harmonies to keep even the casual listener interested.

That’s not to say that those who’ve always found Dirty Projectors annoying won’t continue to do so. The singing sometimes descends into caricature, while the occasional zaniness of the backing tracks can lurch away from adding character into the realm of simply distracting. Still, the record is unlikely to disappoint fans and is catchy enough to potentionally attract more radio airtime than ever before. Swing low, sweet Projectors. 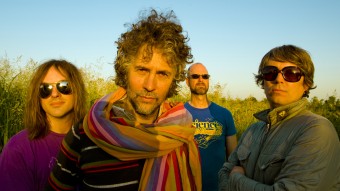 Having recently entered The Guinness Book of Records/Freaks/People With Too Much Time On Their Hands by breaking Jay-Z's record for most gigs performed in separate cities in 24 hours, The Flaming Lips look certain to set another one with their new album 'Heady Fwends' - Most Unlikely Collaborations On A Single Record. Boasting appearances from such diverse artists as Ke$ha, Nick Cave and Lightning Bolt, what sounds on paper like it could end up a vainglorious mess results instead in a surprisingly rounded album.
The fuzzed-up bass of 2009's mind-blowing 'Embryonic'album is still very much in evidence on 'Children of the Moon' (feat. Tame Impala), while 'Is David Bowie Dying?' (feat. Neon Indian) sounds like a David Lynch astral projection. Then there's 'The First Time Ever I Saw Your Face', the Erykah Badu collaboration which caused a huge Twitter spat between Badu and Wayne Coyne when the raunchy accompanying video was leaked online. While admittedly less exciting when stripped of the video's gratuitous, cornstarch-enhanced nudity, the song itself is ten minutes of vibraphone-flecked bliss.
The album's full of equally impressive achievements, not least Yoko Ono's least irritating appearance in many years on 'Do It!', and exhibits huge levels of scope and ambition. While it may go on a little too long, 'Heavy Fwends'confirms what 'Embryonic' hinted at – The Flaming lips are making better music now than ever before.
Read More