Recorded during the summer of 2011 in a converted barn in rural Connecticut, In Limbo puts pop and tribal elements to the fore. Opener “Better” is a Suicideesque march toward euphoria through repetition. “Sleep in Noise” comes on like a neo-psychedelic tribal stomp with a Spector-esque drive, while “Unable,” an all-butshapeless mass of organ swells and tremolo synths provides a loose structure for their transcendent vocal acrobatics.

In Limbo was mixed and produced in collaboration with Sonic Boom (Spacemen 3, Spectrum). His influence and guidance is subtly evident throughout, adding sympathetic undertones and ambience to the band’s well defined and inspiring songs. 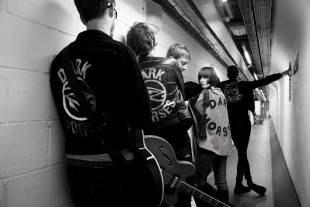 This six piece, formed of various countries and usually joined with a leather jacket and greased back hair mob, are a cult band in the making. Their live shows are backed with projections of warped art galleries and surrounded by prints of nameless facess looking grizzly. Combining large, shoegaze inspired riffs with psych out moments and an impressive front woman performance it's hard not to just really like them.
Read More